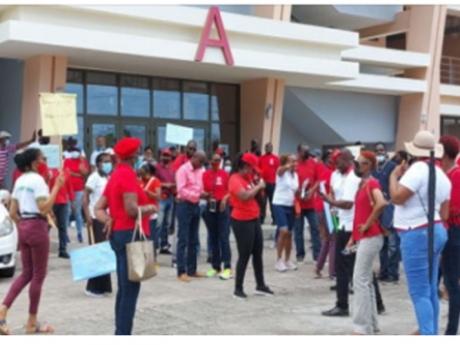 Civil servants protest in support of the restoration of pensions in Grenada - CMC photo.

ST GEORGE'S, Grenada, CMC – Public sector workers took to the streets on Wednesday urging the Grenada government to restore their constitutionally guaranteed right to a pension on retirement.

The protest was organised by the Public Workers Union (PWU), the Grenada Union of Teachers (GUT), and the Technical & Allied Workers Union (TAWU) and comes less than 24 hours before the High Court is to hear arguments from attorneys representing both the State and the unions on the restoration of the pension.

“We are calling for the court to restore justice. The justice that the government has failed to implement for the working-class men, the teachers, public officers, nurses, doctors, police officers, prison officers,” said GUT President, Jude Bartholomew.

“We ask for social and economic justice and we ask the Government of Grenada to restore our pension,” he told reporters.

Bartholomew said that the pension for public officers became legal in 1958 and was included in the Constitution when the island gained its political independence from Britain in 1974.

“Justice must be done for the workers,” Bartholomew said.

The pension issue surfaced with the collapse of the 1979-83 Grenada Revolution which had suspended the island's Constitution, which was only restored after the left-wing government of Prime Minister Maurice Bishop was removed in a palace coup, allowing for the United States and Caribbean troops to restore democratic rule on October 25, 1983.

During the reign of the People's Revolutionary Government, it established the National Insurance Scheme (NIS) as a replacement for the pension provisions that were enshrined in the Constitution.

However, prior to the 2018 general election, the ruling New National Party of Prime Minister Dr Keith Mitchell signed a Memorandum of Understanding with public sector unions to provide for pension restoration.

“The government is fully committed to ensuring a just and equitable pension arrangement that would allow retired public officers to be able to have dignity and a high quality of life in post-retirement,” Mitchell said in a radio and television broadcast last month.

Mitchell said the government had also commissioned a study of the issue.

“We have received a draft report and are in the process of reviewing the initial recommendations, to ensure that they provide a sound basis for an equitable settlement of this long outstanding issue. It should be noted, with certainty, that this government is determined to resolve the issue, once and for all,” he said then.