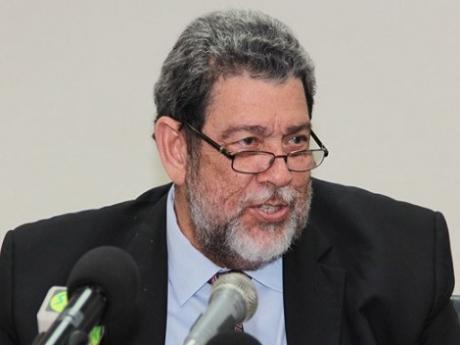 Gonsalves: “As part of this duty, the government has to ensure that any place in which an employee works is safe. This is particularly relevant in the current circumstances of a pandemic and for the duration of the declared public health emergency." - Contributed photo.

KINGSTOWN, St Vincent, CMC – The St Vincent and the Grenadines Government will on Thursday pilot legislation amending the Public Health (Amendment) Bill 2021 that it says will allow for certain categories of public sector employees to be vaccinated in order to work in “frontline” jobs.

“Given the extent of the misrepresentations, and misinformation by some persons about this Bill, it is necessary and desirable to put the record straight,” Prime Minister Dr Ralph Gonsalves said, adding that the legislation “does not involve any legal penalty or punishment on anyone who fails and/or refuses to take the vaccine or test for COVID-19.”

Gonsalves said that it is the intention of the government, however, to make rules under the Public Health Act to require certain categories of employees in the public sector, including those in central government and state enterprises, to take the vaccine in order to work in certain specified “frontline” jobs.

“The choice of working or not working in a particular job which requires vaccination in the interest of public health will be that of the employee. Individual rights are always required in the appropriate circumstances to be balanced by public interest considerations, in this case, the requisites of public health. The relevant rules under the Public Health Act will be made and published in due course in the official gazette,” he said.

“We are protesting because the government does not offer any hope out of this pandemic,” Opposition Leader Dr Godwin Friday said, adding that the protest was also against a number of issues, including jobs and alleged missing state funds.

“As you know the position in my party is that we are in favour of vaccination, but this is something people must do their own research and come to their own conclusion as to what is good and right after they have done their research. This is not something that can be mandated and forced upon people. Nowhere in the world they are doing that,” Friday told the Caribbean Media Corporation.

But Gonsalves, in his statement, said that for public servants, the usual and relevant public service regulations will be applicable in all material circumstances.

The government has said that the rationale for amending the Public Health (Amendment) Bill 2021 is to allow for “where a public health emergency is declared, the Minister can, on the advice of the Chief Medical Officer, implement special measures to mitigate or remedy the emergency.

The legislation will also allow for the removal of the word “voluntary” that appears before “immunisation”.

Gonsalves said that the Public Health Act, which was enacted on April 22, 1977, already contemplates that the Minister can impose mandatory vaccination in the country to prevent, control or suppress a communicable disease.

The government said that this power to impose mandatory vaccination is prescribed by Section 37 (d) of the Public Health Act, which states that “whenever any part of St Vincent appears to be threatened by any formidable epidemic, endemic or communicable disease, the Minister may make rules for all or any of the following purposes, namely (d) preventing any person from leaving any infected area without undergoing all or any of the following, namely, medical examination, disinfection, inoculation, vaccination or revaccination, and passing a specified period in a place of observation”.

Gonsalves said that after considerable thought, it is believed that it is necessary to make Section 43B (2) (a) of the Act consistent with Section 37 of the Act by deleting the word “voluntary” that appears before “immunisation”.

“This is to, among other things, circumvent any potential argument that Section 43B (2) (a) as currently written restricts the operation or implementation of Section 37 (d) or any other provision of the Act.”

He said that the common law imposes on the government a duty to take reasonable care to protect the health and safety of its employees and others.

“As part of this duty, the government has to ensure that any place in which an employee works is safe. This is particularly relevant in the current circumstances of a pandemic and for the duration of the declared public health emergency.

“In order to honour this duty, the government will, by rules to be made under the Public Health Act, impose a requirement for vaccination – with at least the first dose in the case of a vaccine that requires two doses – on those public sector employees who have been employed to work in workplaces the government considers to be high-risk environment.

“These frontline employees would be exempt from the requirement for vaccination on two grounds. First, on the ground that vaccination is not advisable on medical grounds and secondly if the employee objects in good faith that the vaccination is contrary to his religious beliefs and the employer can make alternative arrangements to accommodate the employee,” Gonsalves added.

St Vincent has recorded 2, 291 cases and 12 deaths from the virus since the first case was detected in March last year.