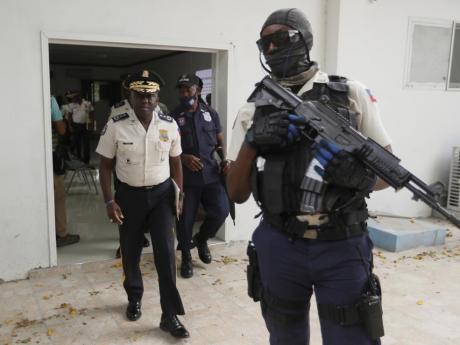 Leon Charles (left), Director General of Haiti's Police, leaves a room after a news conference at police headquarters in Port-au-Prince, Wednesday, July 14, 2021. Charles gave an update on the investigation of the July 7 assassination of President Jovenel Moïse. (AP Photo/Fernando Llano)

SAN JUAN, Puerto Rico (AP) — Police have detained more than 40 suspects in the killing of President Jovenel Moïse, but many people fear Haiti's crumbling judicial system could result in the assassination going unpunished.

Interrogations are continuing, while dozens of suspects, including an ex-Haitian senator and former justice official, are still at large.

But the judicial process has already hit significant snags, among them death threats and allegations of evidence tampering.

Experts and even Haiti's Office of Citizen Protection, an ombudsman-like government agency, warned that the country faces many challenges to properly handle such a complicated case.

“The judicial system is held hostage by certain sectors and weakened by a disciplinary body ... that protects dishonest and corrupt judges but persecutes, through bogus human rights NGOs, those who are honest,” the agency said in a Sunday statement.

Brian Concannon, an adviser for the Institute for Justice and Democracy in Haiti, said he worries about “so much intentional misdirection” as the Moïse investigation moves forward.

“The big issue is are you going to have a structure that can deliver the truth?” he said.

“It's possible there are good people that are getting at the truth, but there is enough misdirection, intimidation (and) people apparently manipulating evidence. ... I'm not confident that we're getting closer to the truth with the current process.”

Haiti's Office of Citizen Protection noted that 32 high-profile killings dating from 1991 have never been resolved, including those of former government officials, lawyers, academics and journalists.

It also accused corrupt judges of freeing suspects arrested by police, noting that in the past two decades there has been no significant criminal process in well-known murder cases.

The agency urged judicial officials, especially Haiti's chief prosecutor, “not to be intimidated by the pressure or the unfair manoeuvres of individuals of all stripes who want at all costs to sabotage the investigation into the assassination of President Jovenel Moïse in order to reinforce the phenomenon of impunity in Haiti.”

Bedford Claude, the Port-au-Prince prosecutor overseeing the case, did not return messages for comment.

A recent report submitted to the United Nations Human Rights Council that has not been made public but was shared with The Associated Press condemned what it called chronic impunity in Haiti and the lack of an independent justice sector.

“The judiciary remains in a state of chronic dysfunction,” the report said, blaming increased political interference, threats against judicial officials and lack of resources among other things.

“Corruption is rampant and there are clear indications of the judiciary acting to vindicate political and other ends, rather than those of justice.”