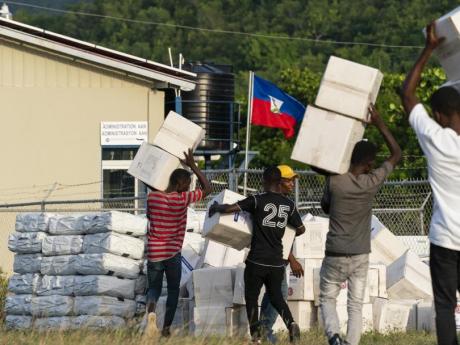 JEREMIE, Haiti (AP) — United States military aircraft are now ferrying food, tarps and other material into southern Haiti amid a shift in the international relief effort to focus on helping people in the areas hardest hit by the recent earthquake to make it through the hurricane season.

Aircraft flying out of the capital, Port-au-Prince, arrived throughout the day Saturday in the mostly rural, mountainous southern peninsula that was the epicentre of the August 14 earthquake.

In Jeremie, people waved and cheered as a Marine Corps unit from North Carolina descended in a tilt-rotor Osprey with pallets of rice, tarps and other supplies.

Most of the supplies, however, were not destined for Jeremie.

They were for distribution to remote mountain communities where landslides destroyed homes and the small plots of the many subsistence farmers in the area, said Patrick Tiné of Haiti Bible Mission, one of several groups coordinating the delivery of aid.

“The mountains slid down and they lost everything.”

At the request of the Haitian government, getting as much help to such people as fast as possible is now the focus of the $32 million US relief effort, said Tim Callaghan, a disaster response team leader for the US Agency for International Development.

In the immediate aftermath of the magnitude 7.2 earthquake, which killed more than 2,200 people and damaged or destroyed more than 100,000 homes, the focus was on search and rescue.

That was complicated by heavy rain from Tropical Storm Grace as well as earthquake damage to roads and bridges in an area where the infrastructure was in bad shape to begin with.

The threat of gangs, in a country still reeling from the July 7 assassination of President Jovenel Moïse, also made it hard to distribute aid.

As a result, many Haitians had grown increasingly impatient with relief efforts.