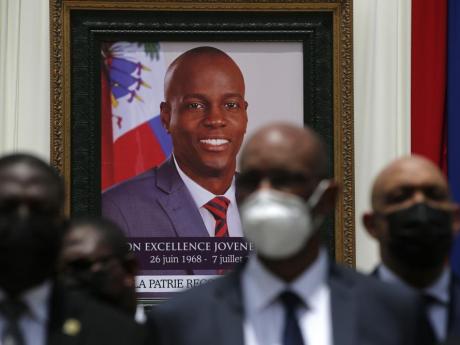 In this July 20, 2021, file photo, authorities pose for a group photo in front of the portrait of late Haitian President Jovenel Moïse at the National Pantheon Museum during his memorial service in Port-au-Prince, Haiti. Moïse was assassinated on July 7 at his home. (AP Photo/Joseph Odelyn, File)

PORT-AU-PRINCE, Haiti (AP) — In the nearly two months since President Jovenel Moïse was assassinated, Haiti has suffered a devastating earthquake and a drenching tropical storm, the twin natural disasters deflecting attention from the man-made one that preceded them.

Add the constant worry over deteriorating security at the hands of gangs that by some estimates control territory that's home to about a fifth of Haiti's 11 million citizens, and the investigation into Moïse's killing is fast fading from the public consciousness.

Even those still paying attention, demanding accountability and pressuring for a thorough investigation give no chance to the crime's masterminds being brought to justice in a country where impunity reigns.

It doesn't help that Moïse was despised by a large portion of the population.

The murder seems destined to join other assassinations in Haiti, like that of respected journalist Jean Dominique in 2000 and prominent lawyer Monferrier Dorval last year, both unsolved.

“The hope for finding justice for Jovenel is zero,” said Pierre Esperance, executive director of the National Human Rights Defence Network, which is one of Haiti's most prominent and respected rights groups and a member of the International Federation for Human Rights.

Despite Esperance's pessimism, his group published a detailed report on the July 7 killing, in which a team of Colombian mercenaries breached the president's private residence high in a hillside neighbourhood above Port-au-Prince, then fatally shot Moïse and wounded his wife.

The report largely tracks the government's arrests of suspects thus far, implicating those in charge of Moïse's security.

“The intellectual and material authors of this assassination were able to count on the support of at least two heads of presidential security,” the report charges.

But it also suggests that Prime Minister Ariel Henry, Justice Minister Rockefeller Vincent and even Martine Moïse, the former president's wife, know far more about the killing than they have shared.

The group says its report was based on notes made by the magistrates of the peace involved in the initial stage of the investigation and on conversations with those who were arrested.

Asked about other sources, Esperance demurred.

The report alleges the prime minister had multiple phone calls, including on the morning of the assassination, with Joseph Badio, a former justice official now at the centre of the murder investigation as a suspect.

When Henry was asked about the calls with Badio in a recent radio interview, he said he knew Badio and defended him.