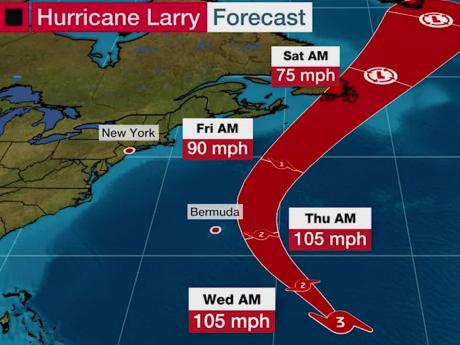 HAMILTON, Bermuda, CMC — A tropical storm watch has been posted in Bermuda as Hurricane Larry continues to head towards the British Overseas Territory.

Forecasters have predicted that Larry, a Category 3 hurricane packing 115 miles per hour winds on Wednesday morning, will pass around 170 miles east-northeast of the island on Thursday,  but storm conditions could still cause problems on the island.

The Bermuda Weather Service said conditions are expected to deteriorate Wednesday night through Thursday morning with strengthening winds and rain.

Larry is expected to be a Category 2 storm when it passes the island.

The weather service said hazardous swells are expected, particularly along the South Shore, with dangerous surf and rip currents.

At 6:00 a.m. local time on Wednesday, Larry was situated 603 miles southeast of Bermuda and moving northwest at about 10 miles per hour.

National Security Minister Renee Ming said the Emergency Measures Organisation (EMO) had met twice to discuss the storm and that the hurricane was forecast to pass “well to our east” and no interruption of government services was expected.

“However, from a storm preparation standpoint, we should not become complacent. We are advising residents to prepare for possible tropical storm force winds on Thursday and expect increasing swells along the South Shore,” Ming said.

She said the EMO would meet again on Thursday morning and appealed to the public to make sure they were prepared.