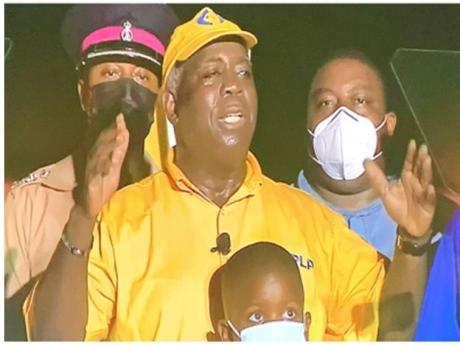 Davis: “You voted for a new day, new beginning. We are a nation and a people yearning for renewal. It is time to face our challenges and face them head-on. We will do so with humility, but also with determination." - Contributed photo.

NASSAU, Bahamas, CMC – The main opposition Progressive Liberal Party (PLP) was swept into office on Thursday, four years after it was severely trounced by the Free National Movement (FNM).

“Thank you for seeing the possibilities of what we can build together for our children and grandchildren. In the morning, we will rise as one nation and meet the challenges ahead,” PLP leader Phillip “Brave” Davis, 70,  told supporters after Prime Minister Dr Hubert Minnis had called him to concede defeat.

In the last general election, Minnis had led the FNM to a convincing 35-4 margin for control of the 39 seat Parliament and unofficial preliminary results on Thursday showed that the PLP had won 32 of the seats with seven going to the FNM.

In his congratulatory speech, in which he thanked all the PLP candidates and supporters for reversing the “dark days” of 2017, Davis, an attorney, told the electorate that they had voted “with brave hearts, hearts full of hope for our country.

“You voted for a new day, new beginning. We are a nation and a people yearning for renewal. It is time to face our challenges and face them head-on. We will do so with humility, but also with determination.

“We will work so that opportunities reach out to every home because we believe the dignity of every member of our Bahamian family. To those who voted PLP today, I promise to work hard to justify your faith in us. For those of you who voted for a different party today, I pledge to work hard to overcome your doubts,” he added.

Minnis had defended his decision to call an early general election even as the country continues to battle the coronavirus (COVID-19) pandemic.

Critics, including some of the country's foremost physicians, had expressed grave concerns that the public health care system will continue to teeter on the verge of collapse as they predict increased virus cases.

The elections here were observed by several teams including the Caribbean Community and the Organisation of American States.