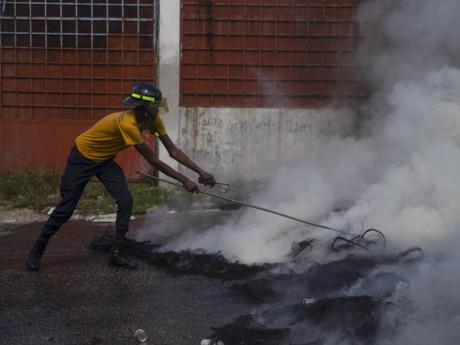 A firefighter puts out a smoldering roadblock set by protesters in Port-au-Prince, Haiti, Monday, October 18, 2021. Workers angry about the nation’s lack of security went on strike in protest two days after 17 members of a US-based missionary group were abducted by a violent gang. (AP Photo/Joseph Odelyn)

PORT-AU-PRINCE, Haiti (AP) — A gang that kidnapped 17 members of a United States-based missionary group has demanded a $17 million ransom for them, according to Haiti's justice minister, as quoted by the Wall Street Journal.

Quitel did not immediately return messages for comment, but he also confirmed the figure to the New York Times.

The Journal said he identified the ages of the abducted children as eight months and 3, 6, 14 and 15 years.

A wave of kidnappings prompted a protest strike that shuttered businesses, schools and public transportation in a new blow to Haiti's anaemic economy, and unions and other groups vowed to continue the shutdown Tuesday.

FBI agents and other US officials are helping Haitian authorities hunt for the 12 adults and five children linked to the Christian Aid Ministries in Ohio who were kidnapped Saturday during a trip to visit an orphanage.

It is the largest reported kidnapping of its kind in recent years, with Haitian gangs growing more brazen and abductions spiking as the country tries to recover from the July 7 assassination of President Jovenel Moïse and a magnitude 7.2 earthquake that struck southern Haiti on August 14 and killed more than 2,200 people.

“We are calling on authorities to take action,” said Jean-Louis Abaki, a moto taxi driver who joined the strike Monday to decry killings and kidnappings in the hemisphere's poorest nation.

With the usually chaotic streets of Haiti's capital quiet and largely empty Monday, Abaki said that if Prime Minister Ariel Henry and National Police Chief Léon Charles want to stay in power, “they have to give the population a chance at security.”

Haitian police told The Associated Press that the abduction of the 16 Americans and one Canadian was carried out by the 400 Mawozo gang, a group with a long record of killings, kidnappings and extortion.

In April, a man who claimed to be the gang's leader told a radio station that it was responsible for abducting five priests, two nuns and three relatives of one of the priests that month.

They were later released.

At least 328 kidnappings were reported to Haiti's National Police in the first eight months of 2021, compared with a total of 234 for all of 2020, said a report last month by the United Nations Integrated Office in Haiti.