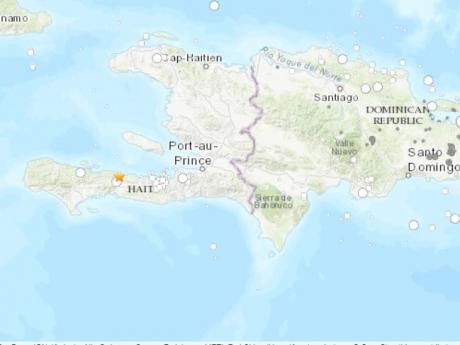 A magnitude 5.3 quake at 8:16 a.m. was followed by a magnitude 5.1 quake nearly an hour later. Both were centred on Haiti’s southern peninsula, west of the capital, Port-au-Prince, according to the US Geological Survey.

Both were centred on Haiti's southern peninsula, west of the capital, Port-au-Prince, according to the US Geological Survey.

It said both were centred about 10 kilometres or six miles below the surface.

Yves Bossé, an elected official for the southern department of Nippes, told The Associated Press that one person died when the earthquake caused a landslide at a sand mine.

He also said several homes were cracked and that businesses shut down for the day.

“People are scared to go back into their homes,” he said.

Sylvera Guillame, director of Haiti's civil protection agency for the country's southern region, told AP that schools in the area also closed and sent children home as a precaution.

A magnitude 7.2 earthquake struck southwest Haiti on August 14, killing more than 2,200 people and damaging or destroying some 137,500 homes.