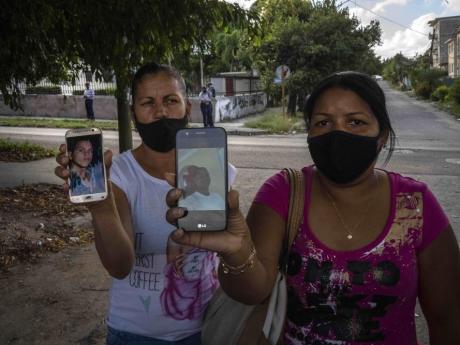 Servilia Pedroso (right), the mother of 18-year-old student Eloy Barbaro Cardoso, and Yaquelin Cruz, the mother of Dariel Cruz, show the photos of their sons who were arrested during the July 11 protests, in front of the court building where they are being tried in Havana, Cuba, Tuesday, January 11, 2022. Six months after surprising protests against the Cuban government, more than 50 protesters who have been charged with sedition are headed to trial and could face sentences of up to 30 years in prison. (AP Photo/Ramon Espinosa)

The announcement was the first from prosecutors since August, a month after thousands of Cubans protested in Havana and other cities over grievances including power blackouts, economic hardship and the tightly controlled political system.

The demonstrations were the biggest and most unruly in decades in a nation where freedom of assembly is heavily restricted.

Most of the suspects remain in jail pending the outcome of the mass trials. Some could face prison sentences of up to 30 years in prison if convicted.

The attorney general's office said sedition charges related ″to the level of violence demonstrated,″ noting that some protesters threw stones at hospitals, gasoline stations and other facilities, and also looted.

So far, Cuban courts have heard cases involving 710 people involved in the protests on July 11-12, and 172 have been convicted and sentenced, according to the attorney general's office.

About half of the 55 minors involved in the protests are in detention, it said. Cubans can be prosecuted as adults from the age of 16.

Justicia 11J, a human rights group that monitors the cases and tries to contact the families, had reported 1,300 arrests.

After the protests, Cuban leaders acknowledged some complaints were justified and said they would seek to alleviate distress through social and economic programs.

The government blames a US economic embargo, rather than its state-centred policies, for its problems.