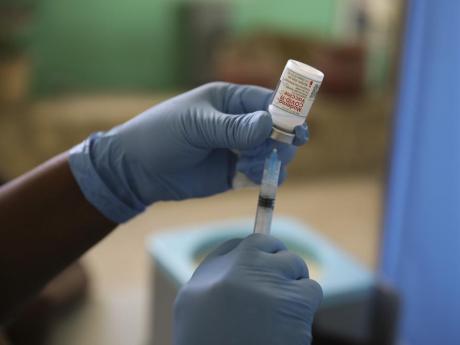 A medical worker prepares a shot of the Moderna vaccine during a vaccination campaign at Saint Damien Hospital in Port-au-Prince, Haiti, Tuesday, July 27, 2021. Haiti's health minister said Tuesday, January 25, 2022, that the country is fighting a rise in COVID-19 cases as the government struggles to convince people to get vaccinated. (AP Photo/Odelyn Joseph, File)

PORT-AU-PRINCE, Haiti (AP) — Haiti is fighting a rise in COVID-19 cases as the government struggles to convince people to get vaccinated, the country's health minister told The Associated Press on Tuesday.

The country of 11 million people has reported more than 28,500 confirmed cases and 780 deaths, although experts say they believe the numbers are underreported given the widespread lack of testing.

According to the World Health Organization, more than 204,900 vaccine doses have been administered in Haiti, but the local government notes that only some 75,500 people have received two doses, with no boosters yet given.

“Unfortunately, the population showed no enthusiasm. ... We live in a land of non-believers,” said Lauré Adrien, general director of Haiti's Ministry of Health.

“The vaccination campaign is progressing slowly, not at the desired pace.”

He said another problem is that some health centres have no vaccines while others have a surplus that goes unused.

“We are working hard to better manage demand and ensure that inventory is used efficiently and equitably,” he said.

Up until mid-July of last year, Haiti was the only country in the Americas that had not received a single vaccine dose.

Adrien said he believes the omicron variant is present but said he was unable to provide any proof because Haiti does not have the required laboratories or resources to carry out that kind of specific testing.

Instead, he said the government is forced to send a small group of samples to Brazil to test for the omicron variant and that it takes a long time to obtain the results.

He added that samples taken from people believed to be infected in December and January are still being processed.