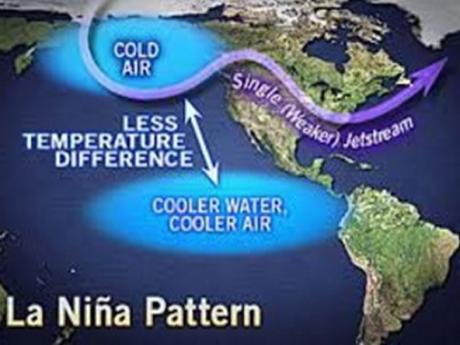 During a La Niña year, winter temperatures are warmer than average in the south and cooler than normal in the north. - Contributed photo.

BRIDGETOWN, Barbados, CMC – The Barbados-based Caribbean Climate Outlook Forum (CariCOF) says a persistent La Niña pattern is expected to continue during the core dry season, which should drive increasing dry spells across the northwest section of the region.

In its latest outlook, the agency said that for the period February to April the La Niña pattern will continue to Aruba, Bonaire, and Curaçao (ABC islands) and Belize where seasonal rainfall is expected to be usual or drier.

And during a La Niña year, winter temperatures are warmer than average in the south and cooler than normal in the north

“A higher frequency of wet days and wet spells are forecast for the eastern Caribbean where rainfall is expected to be at least as wet as or wetter than the usual, which should taper the chances of wildfire and promote water reservoir capacity,” CariCOF said.

It said extreme wet spells for the region are not expected to feature prominently during the upcoming season.

It said the end of 2021 stood out in terms of a quiet cessation to the hurricane season along with dry seasonal rainfall anomalies for much of the eastern Caribbean.

Heat discomfort progressively decreased along the three-month period as the Caribbean transitioned out of the 2021 heat season.

According to CariCOF, rainfall totals from February to April are likely to be at least as high as usual in the ABC islands, Lesser Antilles, and the Guianas, but likely the usual or drier in the Bahamas and Cuba.

The entity said that long-term drought, at the end of May, is evolving western Cuba, Dominica, Guadeloupe, Martinique, and USVI and might possibly develop or continue in Antigua, southern Belize, Dominican Republic, western Puerto Rico, St Lucia, St Vincent, and Sint Martin.