In Cuba, caution and confusion meet eased US sanctions 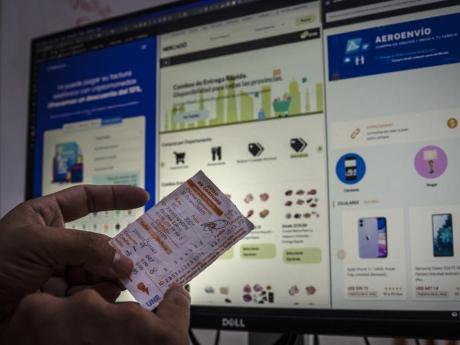 Erich García, a programmer specialising in cryptocurrencies and an administrator of electronic commerce pages, shows how an electricity bill can be paid through cryptocurrency systems and electronic payments in Havana, Cuba, Friday, May 20, 2022. (AP Photo/Ramon Espinosa)

HAVANA (AP) — Marylín Álvarez seemed to be just the sort of person that eased American sanctions on Cuba were meant to help.

With the aid of money sent by a cousin living in the United States, she began transforming the entrance to her ground-floor apartment into a tiny cafe about four years ago.

It was one of myriad small private businesses blossoming on the Communist-led island as US President Barack Obama's opening to Cuba led to more money and visitors from the north.

She bought a freezer, a juicer and some cups. She installed a new water faucet and was about to add a sink to go with it, as well as chairs and ingredients for the food she was going to sell at her doorway in Havana.

And then it all fell apart.

Former President Donald Trump tightened the six-decade-old embargo of Cuba and sharply restricted money transfers to Cuba in late 2020, shutting down the system that made them relatively easy: Western Union transfers to a government-owned Cuban exchange house.

Álvarez abandoned her application for a small business license.

Now the administration of new President Joe Biden is once again making it legal for Americans to send larger amounts of money to Cuba, saying it hopes to stimulate private enterprise there.

But so much has changed over the past two years that Álvarez is wary of reviving her plans — an example of the caution with which many Cubans are greeting the new measures and confusion about how they may work.

Cuba's economy has been devastated by the loss of tourism caused by the pandemic and by Trump's tougher sanctions. Fewer people would have money to buy the coffee and snacks Álvarez hoped to sell.

The government's lack of hard currency has hit imports, so it's extremely difficult to get reliable supplies of the flour, coffee and cheese Álvarez would need for her products — and prices for those scarce goods have been soaring.

That crisis also collided with the local government's effort to fix deep-rooted problems by eliminating an old two-currency system while raising pay and prices last year. That coincided with the emergence of a black market for foreign currencies and sharply added to inflation. While the new peso is supposed to be valued at 24 per dollar, people on the street sometimes offer 100.