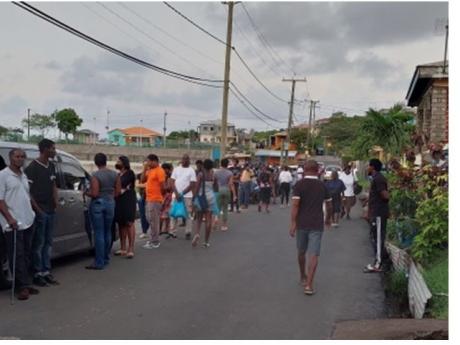 Voters line up to cast ballots at a school on the southwestern coast of Grand Anse in Grenada’s general election. - Contributed photo.

ST GEORGE'S, Grenada, CMC – Grenadians were casting their ballots on Thursday to elect a new government in a general election that Prime Minister Dr Keith Mitchell called ahead of the constitutional March 2023 deadline.

Mitchell's New National Party (NNP) is among five political parties and one independent candidate facing the 87, 506 voters and seeking a historic third consecutive term in office, having won the last two general elections by sweeping all the 15 seats in the Parliament of the tri-island state.

Its main challenger, as had been the case in the previous elections, will be the National Democratic Congress which is being led for the first time by 44-year-old attorney Dickon Mitchell, who has vowed to win back the government the party lost in 2013.

On Wednesday evening, the High Court threw out at least two attempts to postpone the elections, including an application filed by a blind man, John Rullow, who argued that his right to secrecy would be violated on Election Day.

The polls are being monitored by observer teams from the Caribbean Community (CARICOM) and the Organization of American States (OAS).

The Parliamentary Electoral Office is promising a free and fair election.

The 285 polling stations will close at 5:00 pm (local time) and the office said that Grenadians will have an idea of the winner within three to four hours.