Haiti’s struggle worsened in year since slaying of president 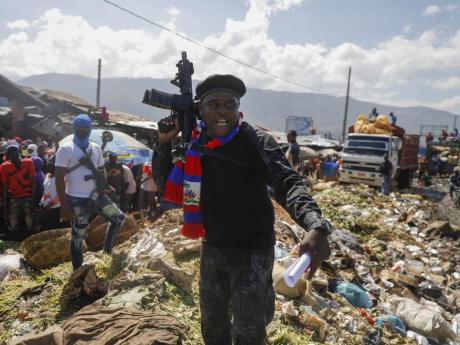 Barbecue, the leader of the "G9 and Family" gang, stands next to garbage to call attention to the conditions people live in as he leads a march against kidnapping through La Saline neighbourhood in Port-au-Prince, Haiti, Friday, October 22, 2021. The group said they were also protesting poverty and for justice in the slaying of President Jovenel Moise. (AP Photo/Odelyn Joseph, File)

PORT-AU-PRINCE, Haiti (AP) — A year has passed since President Jovenel Moïse was assassinated at his private home where an elite security team was supposed to protect him.

Not only have authorities failed to identify and arrest all those who masterminded and financed the killing, but Haiti has gone into freefall as violence soars and the economy tumbles.

Many have fled Haiti in the past year, making potentially deadly voyages aboard rickety boats filled with hundreds of Haitians that have repeatedly turned up on the shores of nearby nations.

They chose to face that risk rather than go hungry and fear for their lives, as do many people who have stayed behind.

Killings have soared and thousands of families have been driven from their homes by gangs battling over territory ever since Moïse was shot to death shot last July 7 at his home near the capital, Port-au-Prince.

An overwhelmed government is struggling to crack down on the gangs and reduce a spike in kidnappings linked to them. At the same time, attempts to form a coalition government have faltered in recent weeks and efforts to hold general elections have stalled, leaving many wondering where Haiti is headed.

Prime Minister Ariel Henry has promised to create a new provisional electoral council, which is responsible for organising general elections, but that hasn't happened. There hasn't been a Parliament because the government failed to organise elections in 2019, and Moïse dismissed most lawmakers in early 2020 and ruled by decree for more than a year before he was killed.