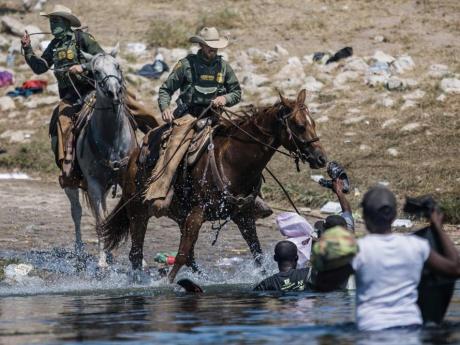 Mounted US Border Patrol agents attempt to contain migrants as they cross the Rio Grande from Ciudad Acuña, Mexico, into Del Rio, Texas on September 19, 2021. Border Patrol agents on horseback engaged in "unnecessary use of force" against non-threatening Haitian immigrants but didn't whip any with their reins, according to a federal investigation of chaotic scenes along the Texas-Mexico border last fall. (AP Photo/Felix Marquez, File)

WASHINGTON (AP) — United States Border Patrol agents on horseback engaged in “unnecessary use of force” against non-threatening Haitian immigrants but didn't whip any with their reins “intentionally or otherwise,” according to a federal investigation of chaotic scenes along the Texas-Mexico border last fall that sparked widespread condemnation.

In a 511-page report released Friday, Customs and Border Protection blamed a “lack of command control and communication” for mounted agents using their horses to forcibly block and move migrants during an influx of Haitians arriving last September at the US border outside Del Rio, Texas.

“We're gonna learn from this incident and we'll find a way to do better,” CBP Commissioner Chris Magnus said during a news conference announcing the report.

“Not everyone's going to like all the findings but the investigation was comprehensive and fair.”

Video and photos of the incident made it appear agents were whipping Haitians, which caused outrage among advocacy groups and civil rights leaders.

The Biden administration promised a full investigation after many in the president's own party objected that such tactics with racial overtones were the kinds of policies the US was supposed to be moving away from after years of hardline immigration tactics under President Donald Trump.

A former police chief, Magnus took over the nation's largest law enforcement agency in December and is being watched closely for shepherding the ongoing investigation.

Homeland Security Secretary Alejandro Mayorkas said in a statement Friday that “the organizational failures of policy, procedures, and training that the investigation identified were a disservice to the agents and the public they serve.”