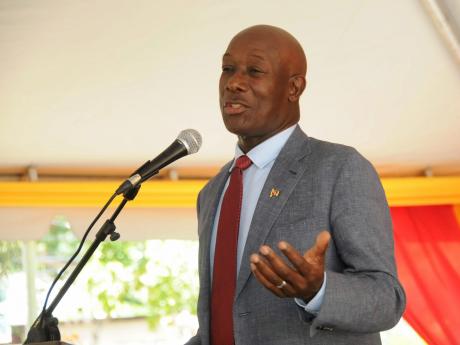 PORT OF SPAIN, Trinidad, CMC – President of the Joint Trade Union Movement (JTUM), Ancel Roget, today said that within the “next 24-48 hours” legal action will be taken against Trinidad and Tobago Prime Minister Dr Keith Rowley over comments he made on social media regarding the blocking of the highway by disgruntled scrap iron workers earlier today.

“I want to categorically, unequivocally, emphatically deny any prior knowledge of or any knowledge of or involvement in this activity,” Roget told a virtual news conference.

Earlier in his social media post, Prime Minister Rowley wrote “so they have made their move.

“Dump truckloads of sand and debris on both sides of the highway and block traffic! What a wonderful idea of leadership from Roget and the followers, including the UNC (main opposition United Nationals Congress)!

“The marauding gangs of metal thieves threatened to, but did not complete the job of shutting down the country, so the leaders are helping them to get that done.”

But Roget, who is also president general of the Oilfield Workers Trade Union (OWTU), said the comments by the prime minister were slanderous, libellous and defamatory against both the union, and himself and injurious to his character.

He told reporters that neither he nor the union had anything to do with the blocking of the Solomon Hochoy Highway “by whosoever” and that the matter is “currently in the hands of our attorneys”, promising that within the “next 24-48 hours action is going to be taken, legal action is going to commence as a result of this very defamatory statement.”

Roget said that Rowley's social media post placed him “at the centre of an activity that I have absolutely no knowledge of, prior or otherwise”.

Earlier this month, the government announced a six-month ban on the exportation of old and scrap metals even as the Scrap Iron Dealers Association (SIDA) said it was prepared to take legal action against the move.

Attorney General Reginald Armour told a news conference that the government had to deal effectively with what he described as the “wanton assault on national security infrastructure,” as a result of the illegal activities linked to the scrap metal industry.

Armour said the theft of copper, particularly from telecommunication companies' equipment, had escalated within the past four months.

“The exportation of old metal is prohibited, except by manufactures licensed by the minister with responsibility for trade to export old material as a bi-product of manufacturing goods or surplus material not required for manufacturing it; old metal and scrap metal are defined in that order,” he told reporters, adding that the government acknowledges the legitimacy of the scrap metal industry.

Armour said the order, effected on August 12, will last until February 2023, but that within three months he would take another submission to the Cabinet regarding the “review and analysis of the current legislation pertaining to the old-metal industry, together with a review of regional and international legislation in that regard, and to make recommendations for amendments to existing regulations and amendments”.

But SIDA has called on the government to reverse its decision to shut down the industry and last week held a motorcade protest against the move.

SIDA has also sought to distance itself from scrap iron workers who have been staging street protests.

Acting Police Commissioner McDonald Jacob said the police are expected to lay charges against those involved in the latest protest action today.