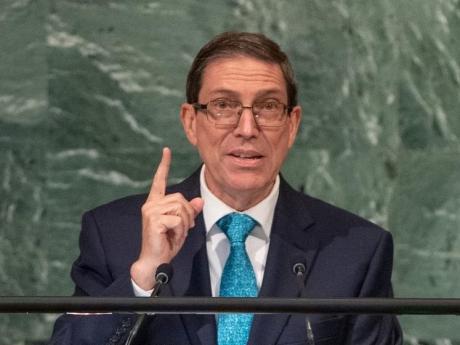 “Never has humankind had this wealth of scientific and technical potential that it has now, neither has it ever had the extraordinary capacity than it does now to create wealth and well-being,” he said on Wednesday. “However, never has the world been so unequal in terms of just how much people suffer.”

Rodríguez pointed to some grim figures, including that some 828 million people are going hungry, around 50 million children suffer from stunting and unemployment will affect 207 million persons in 2022.

He further noted that around 6.5 million people have died because of the COVID-19 pandemic, and vaccinations to tackle this crisis are inaccessible to billions of people in low-income countries.

Referring to global military expenditures which now exceed US$2 trillion, and while championing the universalization of the Comprehensive Nuclear-Test-Ban Treaty, Rodríguez raised the question of how much more could be done if these resources were devoted to promoting health and development, and how many lives could be saved.

He also addressed the economic embargo still in place against his country, as he recalled the General Assembly's adoption of the first resolution to end it 30 years ago and denounced the US for the “act of economic war in times of peace” for ignoring the resolution, creating material shortages, pressuring banking institutions and damaging the Cuban people.

“The Cuban economy has withstood extraordinary pressure which is having an impact on industry service provision, leading to scarcity in food and medicine, and leading to a decline in consumption and thus resulting in a decline in the general well-being of our people. The human damage caused by this policy is impossible to quantify but is nevertheless vast, cruel, and immoral,” he said.

He further criticized the “unfair inclusion” and “slanderous classification” of Cuba as a sponsor of terrorism when the Spanish-speaking Caribbean nation “has been a victim of state terrorism”, as he called out the US for its double standards, inconsistency, selectivity and manipulation, including on human rights.

The foreign minister commended the return of visa processing at the US Embassy in Havana and reiterated Cuba's readiness to move towards better relations with the US but only based on mutual respect, sovereign equality and no attempts at undermining sovereignty and independence.

Meanwhile, Rodríguez expressed support for Caribbean nations' claims for reparations for the slave trade and colonialism, and reaffirmed Cuba's commitment to independence of Puerto Rico and reconstruction of Haiti.