US Embassy in Cuba to process full immigrant visas in 2023 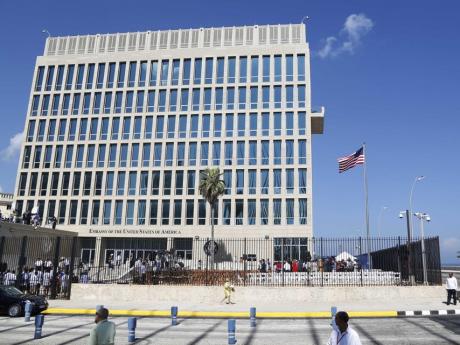 In this August 14, 2015, file photo, an American flag flies at the US embassy in Havana, Cuba. (AP Photo/Desmond Boylan, File)

WASHINGTON (AP) — The Biden administration said Wednesday that the United States Embassy in Cuba will begin processing full immigrant visas in early 2023, making it easier for Cubans to reunite with family members in America.

The embassy in Havana had last processed full immigrant visas in 2017.

The US government will also stop requiring Cubans seeking visas in family preference categories to travel to Georgetown, Guyana, for their interviews.

Additional government personnel will staff the embassy to handle the visa requests.

The added personnel are part of the commitment stemming from the resumption of the Cuban Family Reunification Parole program last month.

The 2007 program enables US citizens and lawful permanent residents to apply for their family members in Cuba to come to the US sooner than conventionally allowed.

Under accords with Cuba, the US has committed to ensuring the legal migration of at least 20,000 Cubans annually, not including immediate relatives of US citizens.

Attempted border crossings by Cubans have increased sharply over the past year, according to data issued Monday by the US Customs and Border Protection. US officials stopped Cubans who were trying to enter the US 19,057 times in August, a more than four-fold increase from August 2021.

Border crossings have been fuelled partly by repeat crossers because there are no legal consequences for getting expelled under a pandemic-era rule known as Title 42. That rule denies a right to seek asylum.