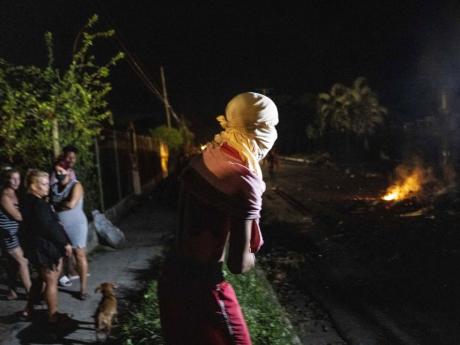 People protest asking for the restoration of the electrical service that collapsed last Tuesday due to the devastation of Hurricane Ian in Bacuranao, Cuba, Friday, September 30, 2022. (AP Photo/Ramon Espinosa)

HAVANA (AP) — The power outage caused by Hurricane Ian has prompted protests in the streets of Cuba's capital as several hundred people demanded restoration of electricity more than two days after a blackout hit the entire island,

An Associated Press journalist saw about 400 people gathered Thursday night in at least two spots in the Cerro neighbourhood shouting, “We want light, we want light,” and banging pots and pans.

It appeared to be the first public display over the electricity problems that spread from western Cuba, where Ian hit, to the entire island, leaving the country's 11 million people in the dark. The storm also left three people dead and caused still unquantified damage.

Power was restored to much of the island within a day after the storm's blast.

Internet service was interrupted Thursday, but there were signs it had returned by Friday morning, at least in some areas.

On Thursday, groups that monitor Internet access reported a “near-total Internet blackout in Cuba.” Alp Toker, director of London-based Netblocks said that what his group saw was different than what happened right after the hurricane hit the island.

“We believe the incident is likely to significantly impact the free flow of information amid protests,” he said.

Doug Madory, director of Internet analysis at Kentik Inc., a network intelligence company, describes it as a “total Internet blackout” that started at 00:30 GMT.

At a protest on Calzada del Cerro, protesters surrounded a work team trying to repair a pole and a light transformer.

Protesters were still in the streets late into the night, but the gatherings remained peaceful.