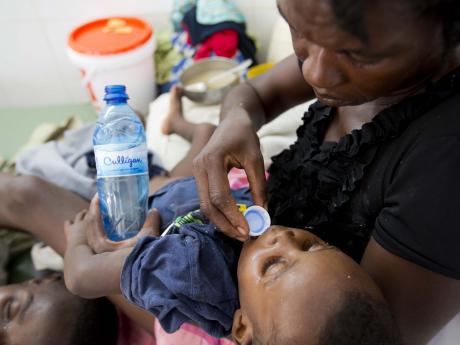 Haiti’s government on Sunday, announced that at least eight people have died from cholera for the first time in three years, raising concerns about another potential catastrophic epidemic like the one that broke out a decade ago and killed nearly 10,000 people. - AP Photo

After more than three years without reported cases, Haiti first confirmed on October 2, two cases of Vibrio cholerae O1. In an update on October 5, national authorities confirmed 11 cases, including two deaths, and a total 111 cases under investigation in various communes around Port-au-Prince.

As an initial immediate response, PAHO donated two tons of medical supplies and materials for case management and disinfection from its emergency stockpile in Port-Au-Prince to Doctors Without Borders/Médecins Sans Frontières (MSF), who is facilitating the health response in the affected area.

PAHO also provided tents to MSF and the Ministry of Health to set up four cholera treatment centers capable of accommodating 50 patients each. In addition, the organization is procuring cholera kits and other essential supplies to treat patients and to prevent the further spread of the disease.

Haiti is currently facing a complex humanitarian crisis, including socio-political unrest and fuel blockages that significantly constrain the operation of health services and hinder the provision of humanitarian assistance by international organizations and partners.

Access to affected communities is extremely challenging and has worsened in the past weeks due to fuel shortages, protest marches, lootings and general strikes. Health facilities are beginning to close their doors and healthcare workers are unable to commute to work.

Patients encounter the same difficulties due to lack of transportation and roadblocks around the Port-au-Prince metropolitan area. Power supply issues affect the population's access to water, which can aggravate the already precarious situation.

In an epidemiological alert issued on October 2, PAHO warned that the worsening violence affects the timely assessment of the epidemiological situation, and that cholera cases are likely to be higher in the country. PAHO emphasized that the social-political and conflict conditions could greatly impact the dynamics of cholera resurgence and the severity of the disease in patients suffering from acute diarrhea.

PAHO recommended that countries in the region strengthen their surveillance systems for the early detection of cholera and acute diarrheal disease and update their preparedness and response plans. The organization also called on member states to continue efforts and reinforce actions to improve water and sanitation quality and conditions.

Between October 2010 and February 2019, a sustained outbreak caused more than 820,000 cholera cases and almost 10,000 deaths in Haiti. In February of this year, Haiti marked three years without cholera and was preparing to submit its case for cholera-free status certification at the end of 2022.

Cholera is spread through water and food contaminated by feces and causes acute diarrhea within hours. Safe water and sanitation are critical to prevent and control cholera transmission, which can be a challenge in poor communities and in situations of conflict. The disease is treatable with rehydration measures and antibiotics.