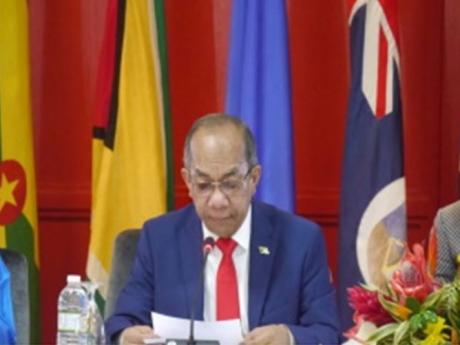 Addressing the 24th CONSOLE meeting that ends later on Friday, Chang, who is also Jamaica's National Security Minister, said that at the previous meeting of the grouping in February the four areas were identified as common security interests to member states.

“These areas of focus will continue to be underpinned by the critical areas of information and intelligence sharing and border security. These common threats have the potential to dismantle any gains we make as a region in achieving our sustainable development goals,” he said.

Chang said trafficking in persons, for example, results in the most vulnerable in the region being exploited into forced labour, sexual servitude, and debt bondage.

He said the latest UN Office on Drugs and Crime Global Report on Trafficking in Persons showed that around one-third of all detected victims are children, a share that has tripled over the past 15 years.

“Indeed, we can all agree that renewed and reinvigorated action against this crime is needed more than ever, as economic hardship, conflict, and health and climate emergencies globally are increasing and compounding vulnerabilities to trafficking, exploitation and abuse.”

Chang said that the issue of illicit firearms trafficking was identified as a tier one threat in the CARICOM Regional Security Strategy and as one of the main drivers of criminality levels in the region.

He said it has the potential to cripple the already fragile socio-economic developmental progress in CARICOM and the advancement of the CARICOM Single Market and Economy (CSME) that allows for the free movement of goods, skills, labour and services across the 15-member regional integration grouping.

“None of our countries manufacture firearms and yet the ill effects of their proliferation and the contribution to gang violence and transnational criminal activities permeate our respective territories and are responsible for more than 70% of homicides in CARICOM.  It is within this context that it is important to disrupt and prevent illegal firearms and ammunition passing through our borders.”

Chang said while he recognises and appreciates the individual efforts made in addressing these security threats, the critical areas identified have been the greatest challenges to the region.

“At the national level, this has led to increased budgetary allocation and investments and manpower, in an already tight fiscal space. As Ministers of National Security and security experts, we not only have a duty but a responsibility to ensure that our resources are efficiently and appropriately managed; research, analysis and monitoring of activities/initiatives are effectively conducted; and that there is real tangible value in the partnerships we forge at the national and regional levels.

“We must, therefore, seek to strengthen our relationships across member states, so that the existing silos can be addressed,” he told the gathering of national security ministers and commissioners of police.