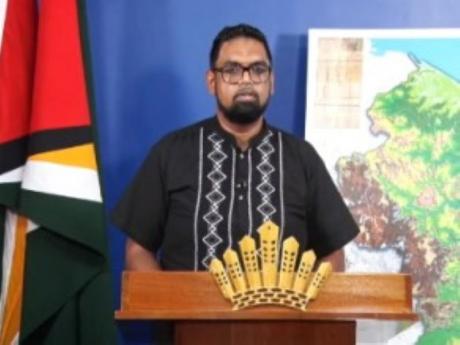 President Dr Irfaan Ali in a radio and television broadcast on Thursday night said that the increase will be granted retroactively to January 1, 2022. - CMC photo

GEORGETOWN, Guyana, CMC – The Guyana government has announced an across-the-board increase of eight per cent to public servants, teachers, members of the disciplined services, constitutional office holders, as well as government pensioners.

President Dr Irfaan Ali in a radio and television broadcast on Thursday night said that the increase will be granted retroactively to January 1, 2022.

“Work will start immediately to ensure that this increase is processed and paid to eligible employees together with their December salary,” he said, adding that further announcements will be made next week in relation to the specific categories of employees.

“My government remains resolutely committed to ensuring that the lives of all Guyanese are improved steadily, and in a tangible and demonstrable manner, as we work towards realising national prosperity for the benefit of all Guyanese,” he said.

Ali said that in the 2022 national budget provisions were made to meet the cost of a public service salary increase for this year and that this commitment comes against the backdrop of several other measures his administration has implemented since assuming office, all with the aim of improving disposable incomes to public sector employees and Guyanese at large.

He said these measures included a seven  per cent across-the-board increase last year as well as the restoration of the one-month tax-free year-end bonuses to the disciplined services totalling more than one billion dollars (One Guyana dollar=US$0.004 cents).

Ali said that the government also remains mindful of the extraordinary shocks experienced this year in relation to the cost of living, especially arising from imported factors.

“Consistent with all these earlier measures, I have instructed that options be identified for adjustment to the salaries paid to a number of specific categories of public sector employees. These include, in the first phase, ranks of the Police Force, Prison Service, and Fire Service.

“Additionally, a similar exercise is currently being conducted and recommendations being made in relation to specific categories of employees in our public healthcare system, including nurses, interns, doctors, and other healthcare professionals. In relation to these categories of employees,” Ali said, adding that he would be making a more detailed announcement during the course of next week.