UN: Children in Haiti hit by cholera as malnutrition rises 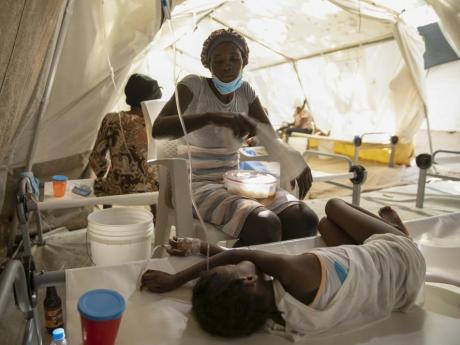 A woman uses a towel to swat flies away from her daughter stricken with cholera, at a clinic run by Doctors Without Borders in Port-au-Prince, Haiti, Friday, November 11, 2022. (AP Photo/Odelyn Joseph)

PORT-AU-PRINCE, Haiti (AP) — A cholera outbreak sweeping through Haiti is claiming a growing number of children amid a surge in malnutrition, UNICEF announced Wednesday.

The deadly combination means that about 40% of cholera cases in the impoverished country of more than 11 million inhabitants now involve children, with 9 out of 10 cases reported in areas where people are starving, according to the United Nations agency.

“We have to plan for the worst,” Manuel Fontaine, director of UNICEF's Office of Emergency Programs, told The Associated Press on Tuesday during a visit to Haiti.

Cholera has killed at least 216 people and sickened more than 12,000 since the first deaths were announced in early October, according to the Haitian Health Ministry and Pan American Health Organization.

They say about 9,300 people are currently hospitalised with the disease. Experts believe the number is much higher due to underreporting.

UNICEF and Haiti's government are seeking at least $28 million to help feed, hydrate and care for 1.4 million people affected by the crisis, with that number expected to increase as malnutrition worsens, especially in urban areas such as the Cite Soleil slum in the capital of Port-au-Prince, something that hasn't been seen before.

“Cholera and malnutrition are a lethal combination, one leading to the other,” Fontaine said.