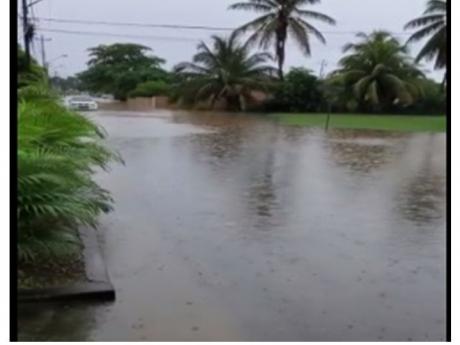 Officials have warned that river levels are likely to continue rising. - CMC photo.

PORT OF SPAIN, Trinidad, CMC – Heavy rains Monday forced the closure of schools and cut electricity and water supplies to parts of Trinidad and Tobago.

Officials have warned that river levels are likely to continue rising.

Local Government Minister Faris Al Rawi told a news conference that “the mission right now is to ensure that we don't have loss of lives and that we mitigate or make better the situation with what we can.

“We are shoring up embankments where we can…and we are on the field in those areas. We are in reconnaissance, search and rescue, and helping people out. As the rains ease… and God willing we get drier days, we are on immense clean-up activities.”

Al Rawi said Trinidad and Tobago had “five days of significant weather and urged people to be extremely careful.

“Even though you may see a break in the rains, the important thing is that the river and the riverine situation is such that they are full and are at capacity. When they breach …they go into the low-lying areas,” he said, describing a number of areas in the country where such a situation has occurred.

“We are looking at swamp waters over seven feet high, so there is a vast amount of water in the position,” he said, adding that there were “83 significant flooding events…137 landslips, fallen trees 31…and there are significant road blocking events including road collapses.”

Public Utilities Minister Marvin Gonzales says repair works are under way as many households are without electricity and water.

He said 16 water treatment plants in Trinidad are out of commission.

He said the persistent rains in Trinidad are making it much more difficult to restore water supplies, noting that in one area WASA had to remove its equipment because of rising river levels.

The Trinidad and Tobago Meteorological Service said Monday that frequent partly cloudy to cloudy periods and rainfall events are likely during November 2022 to February 2023 due to the influence of La Niña.