Vessel sinks with 900 barrels of diesel fuel in Trinidad 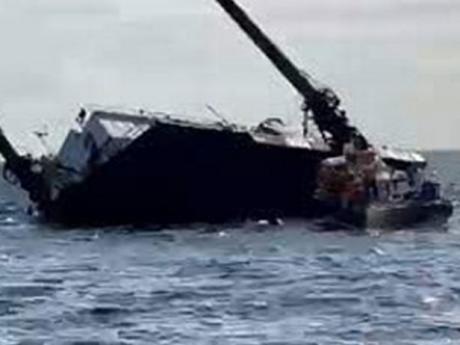 Six persons who were onboard the barge were safely removed and the Ministry said the focus now is to salvage the barge ensuring no oil spills during this process. - Contributed photo.

PORT OF SPAIN, Trinidad, CMC – Trinidad's Ministry of Energy and Energy Industries Wednesday said that a barge carrying 900 barrels of diesel fuel sank while demobilising in the Gulf of Paria and that the six-member crew had been rescued.

In a statement, the ministry said the barge, Liftboat Daniela, the locally owned Trinity Liftboat Services Limited, was attempting to demobilise in the Heritage Petroleum Company Limited's North Field in the Gulf of Paria when it capsized.

Six persons who were onboard the barge were safely removed and the Ministry said the focus now is to salvage the barge ensuring no oil spills during this process.

In a separate statement, Heritage Petroleum Company Limited (Heritage) said it had received an “SOS from a vessel in the North Field” and that it immediately dispatched a response team.

The rescued crew was taken to Heritage's Marine Base and subsequently transported for medical evaluation.

The vessel 'Liftboat Daniela' was not contracted by or performing service for Heritage at the time of the incident, the statement added.

For its part, the company that owned the barge said it had “developed a list” and that the “Captain made the safe decision to abandon the ship, whereby all crew and personnel were evacuated to a nearby vessel which transported them back to the Base in Point Fortin.

“There are no injuries recorded,” the owners said, adding that the vessel “now sits on the seafloor (and) no longer posing a risk to any of Heritage Petroleum's platforms or installations.

It said an investigation has started into the incident.