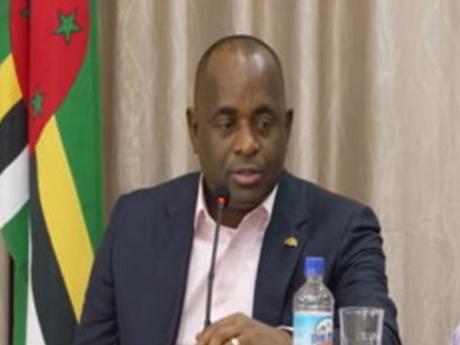 Skerrit: "I accept this victory from the people of Dominica with the greatest humility." - CMC photo.

ROSEAU, Dominica, CMC – The ruling Dominica Labour Party has been returned to power in Tuesday's general election, even as two independent candidates won constituencies in the 21-seat Parliament following a boycott by the main opposition political parties.

Preliminary results released by the Electoral Office showed that the labour party, which had entered the election already having won six seats uncontested, had won 19 of the 21 seats.

The preliminary results showed that independent candidate Jesma Paul polled 617 votes to 463 for the labour party's Lynsia Framk in the Salisbury constituency, while in Marigot, Anthony Charles defeated the labour party's Gregory Riviere by a margin of 491 to 329 votes.

The Electoral Office had said that voters would be electing representatives for 15 constituencies after the main opposition parties – the United Workers Party (UWP) and the Dominica Freedom Party (DFP) – failed to nominate any candidate.

It said 45 candidates contested the 15 remaining seats with the labour party contesting all seats, Team Unity Dominica five seats and there were 10 independents.

Prime Minister Roosevelt Skerrit, 50, who has been in office since 2004 and was among those six labour party candidates elected to Parliament before a ballot was cast, said he welcomed the outcome of the polls.

“I accept this victory from the people of Dominica with the greatest humility. This is an extraordinary confidence that the people have shown in us,” Skerrit said, adding the voter turnout was “exceptional”.

The opposition parties had been calling for electoral reform, including a clean voters list and identification cards, ahead of the poll that is being monitored by observer teams from the Caribbean Community (CARICOM), the Organization of American States (OAS) and the Commonwealth.

Former president of the Caribbean Court of Justice (CCJ), Sir Dennis Byron, who had been appointed as the sole commissioner advancing the efforts towards electoral reform, had proposed presenting the first phase of his report by the end of November with the Parliament tabling the Register of Electors legislation in December and the plan to enact it in January 2023.