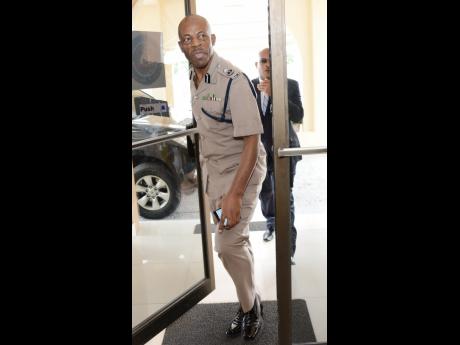 Nevertheless, that's life, and since nobody can force someone to be police commissioner in Jamaica, whoever has the job is and should be expected to perform, just like any other public servant.

When Dr Carl Williams was named Jamaica's top cop 10 months ago, he had the benefit of widespread national support. Those who knew of his work in the force over the years spoke very highly of him, and others were impressed with his academic qualifications. Whatever the reason, there was tremendous hope that Williams would bring a desperately needed new approach to the fight against crime.

Though 10 months isn't a lot of time, Williams' tenure is already being assessed and scrutinised. A population exhausted by crime and violence, and who have long lost hope in most politicians' ability/will to deliver change, wants Williams to be the hero the nation needs. He would have known this coming into the job, of course, and that's why his so-far-uninspiring time as commissioner is leaving some worried.

Now, let's be fair to him. Given the magnitude of the task before him, what could Williams reasonably be expected to accomplish in 10 months? Perhaps not much. And we could assume that he has, behind the scenes, been hard at work crafting a master plan that will eventually lead Jamaicans out of the parched desert of lawlessness and into a promised land of order and civility.

The trouble, though, is that all we can do is assume. We have no idea. And that's not good enough.

In the same way that justice must not only be done, but seen to be done, it is important that the police commissioner be seen to be fighting crime. I think that Williams, generally, has been far too silent and obscure. Jamaicans need to know that there is an actual strategy being implemented to tackle criminality. And it can't be more of the same failed policies and practices.

People are scared and weary and need to be reassured. It's the commissioner's job to offer this reassurance from the standpoint of the police, and it's a part of his job that he shouldn't ignore.

I understand that everyone's personality is different. Williams might just not be one for the spotlight. And this could be a good thing. The last thing Jamaica needs is another showman more interested in crafting a perfectly managed national profile than actually doing any real work.

I do feel, however, that Williams needs to be more vocal and visible, given the nature of his job. His pronouncements this past week don't count. Though I was happy that he was at least saying something, his telling the media to stop counting bodies, and that he's been performing perfectly in his job, is pointless. Among the 'strategies' he chose to speak about at a press conference on Monday was a still-to-be-fleshed-out 'Get the Guns' campaign.

"This campaign is going to enlist the support of all Jamaicans through a rewards scheme. We are going to be giving rewards to members of the public who assist the police with information to seize the guns," said Williams.

I wish he would have gone into more detail on how this will be different from other cash-for-info schemes already in operation. Also, since police-citizen trust, and engagement would be necessary for this tactic to work, shouldn't the commissioner have already been capitalising on the goodwill with which he took the job and been using it to win over the public?

He mentioned, as well, that there would continue to be an increased police presence in known crime hot spots. But is this really a new strategy? To send police to areas where crime is rampant? Seems perfunctory at this point.

With all this said, I'm confident that Williams has the potential to be the police commissioner Jamaica needs. He just has to be more thoughtful about praising himself so publicly when people are burying their murdered children.

By all means, speak out more, Commish, but use these opportunities to show how hard you're working for your fellow Jamaicans whom you've sworn to protect and serve. Do this, and there'll be no need for self-praise. A grateful nation will do it for you.

- Robert Lalah is features editor and author of 'Roving with Lalah'. Email feedback to columns@gleanerjm.com and robert.lalah@gleanerjm.com.