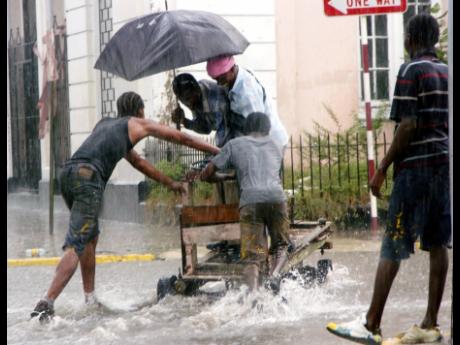 Our weather forecasters had predicted an inordinately long and uninterrupted dry spell ahead of us. The oppressive heat and drought made me believe the meteorologist's predictions.

So, when I heard the rumbling of thunder week before last and saw repeated flashes of lightning across the night sky, I passed them off as a fleeting, unusual minor weather disturbance. And, when my wife announced that it had begun raining, I figured that she was mistaken.

But by the time she managed to close several windows, the floor was wet. Even our cat, Damnpuss, seemed surprised as she stared up at me and vocalised a quizzical "Meow?!"

I should have known better. My father (of blessed memory) once shared his experience with weather forecasts. He was working with the Government to survey roadways somewhere in rural St Andrew. He had checked the weather forecast and it predicted a sunny day. He was, therefore, shocked to see the crew that he met all decked out in water boots and heavy raincoats on hand.

He derided them for their ignorance, and they chided his naÔvetÈ in trusting science as opposed to nature. They claimed to have observed the behaviour of some sort of hairy caterpillar that they used to predict rain. My father said that he almost drowned in a prolonged deluge later that same day.

And, I recall driving to work one morning when the skies suddenly opened up in a veritable torrent. I had to slow to a crawl since my windshield wipers (at full speed) were unable to keep up with the downpour. I recall being astonished because, at that very same time, the current weather report from a nearby radio station said that it was "sunny and dry". As I inched along cautiously, I wondered why they didn't simply look out the window.

Then there was this very interesting television report about a radio station somewhere in Europe. The workers realised that the behaviour of the small herd of goats that hung around a nearby knoll provided a more accurate same-day forecast than the met office. If the goats frolicked at or close to the top of the hill, the probability of rain was extremely low. If they kept close to the bottom of the hill or stayed on the flat, the probability of rain was very high.

The chance of rain varied depending on how far up the hill the goats stayed during that day. Eventually, the radio station abandoned the met office forecasts and, instead, told their listeners where the goats were on the hill.

There are many and varied ways that people all over the world try to predict the weather - from observing Punxsutawney Phil, Wiarton Willie, and Staten Island Chuck, all groundhogs (rodents) used to predict how long winter will linger in different parts of North America to reading goat entrails in order to plan for the planting season in Kenya. The 'predictability' is really only a 50/50 guess.

Some claim that the weather pattern on specific days of the month, squirrel tails, cow tails, seaweed, the height of wasp nests, the thickness of onion skins, ant behaviour, and heaven only knows what else, can also predict the weather.

On the other hand, scientists use satellite images, high-altitude balloons, computer models, cloud patterns and elevation, the movement and hot or cold fronts, barometric pressure, wind, temperature, geography, humidity and Doppler radar to predict the weather.

Forecasting the weather, and rain in particular, is extremely complex. Next-day forecasts are more accurate than 48-hour forecasts and, much longer forecasts are meaningless. Additionally, it is easier to forecast 'no rain' than it is to predict rain because, where uncertainty exists, chances are that it will not rain.

In other words, meteorology is essential, but if the weatherman is sometimes wrong, don't be surprised or upset. It's not his fault. Mother Nature has a mind of her own and, in spite of our advanced science, we sometimes misread it.