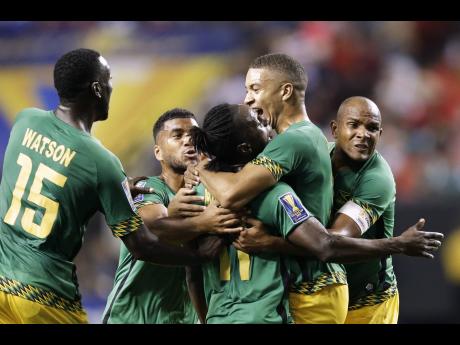 The creditable Gold Cup performance by the Reggae Boyz, who made the final for the very first time, having beaten the USA for the first time on their own soil, has started a serious debate as to whether this current squad is the best to have represented Jamaica in the modern era. The comparison with the team that carried us to the 1998 World Cup is, therefore, inevitable.

That 1998 team brought unbridled joy to most Jamaicans. Never before had Jamaicans been so united on a particular mission. The Road to France was not just a slogan for a football team; it became a national mission statement that every Jamaican identified with. That 1998 team brought Jamaicans together in a way that nothing else has done since 1962. In the 'office', class and status were momentarily forgotten. Crime, we were told, fell dramatically on matchdays then.

Where emotions and passions run so high, logic and reason often get thrown out the window. The feel-good factor and the excitement that that team provided in 1998 mean that few of us can look at those Boyz and reason dispassionately. Most human beings are incapable of reasoning objectively about anything at all that takes them on a high. The 'cokehead', for example, will speak glowingly about the benefits of coke! That 1998 team was good, true, but they were never as good as some of us believe.

I remember how critical we were at our inability to create genuine goalscoring opportunities then. I remember how frustrated we were at our negative football then, where people like Peter Cargill would prefer to pass the ball backwards rather than look for creative attacking options. I remember how nervous we got when we had to play away because, deep down, we were not convinced that we could 'ball' any team at home, much less playing away.

In time, we forget these things, and only think, with nostalgia, of the things that excited us. That 1998 team had heart. Peter Cargill, in that campaign, was past his best. He was an ageing warrior, but gave the impression that he would rather die on yonder field than take a defeat lightly. What he lacked in skill, he made up for in commitment and passion.

COMMITED TO THE CAUSE

People like 'Shorty' Malcolm were no different. He was no big baller, but there can't be too many national players who were as intense and committed to the cause.

'Pepe' Goodison was similar. He had many deficiencies. He was slow, he could be erratic, but he was a no-nonsense man who wore his heart on his sleeve and endeared himself to Jamaica.

That, then, was our reason for loving this side. We bought into a dream of qualifying for a tournament that previously had looked to be beyond our scope and, therefore, that set of players became embedded in our consciousness.

In terms of raw football ability, the current bunch is better. Neither 'Shorty' Malcolm or Peter Cargill could make the present team. Rodolph Austin offers so much more as a holding midfielder than Cargill did during that time, and Shorty, as a defender or a defensive midfielder, cannot play ball like the current bunch.

Dean Sewell and Fabian Davis at right back were not quite the same stamp as a Mariappa now. 'Bibi' Gardner was good at left back then, but Bibi would make far more defensive mistakes than 'Taxi' Lawrence makes now in a similar position. The strength of that team was the defensive trio of 'Tatty' Brown, 'Pepe' Goodison and Linval Dixon. They were special, but Wes Morgan and Jermaine Taylor and Nyron Nosworthy are just as good.

Theodore Whitmore, Walter Boyd and Onandi Lowe were great attacking players who had more individual ability to take on people than the current group, but the team was never as coordinated in attack as the Boyz of now.

Deon Burton saved that team with his four goals in the last round. Deon was nothing special, though. In his 56 games for Jamaica, he scored a mere 12 goals. He did have a spell in that '98 campaign where he found himself in position to score goals that he really couldn't miss. He is not as good a striker as a Darren Mattocks or Giles Barnes now.

This team challenged the likes of World Cup finalists Argentina and outhustled them for a spell in that 1-0 Copa America loss. This team qualified for the final of the Gold Cup, something that eluded even the 1998 team.

If we're discussing the ability to ignite passion and emotion, the 1998 team takes the cake. As a football team, though, the current Boyz have the edge.