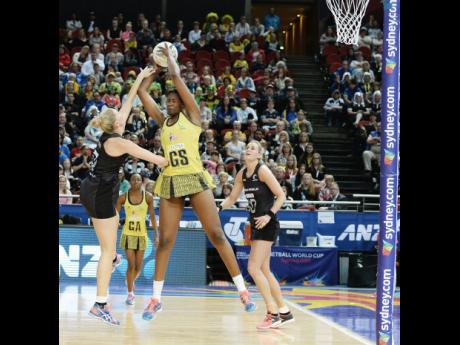 The Sunshine Girls are currently in Australia at the World Cup and are trying to do what they have never done before - win, or at least make the final, of a senior global netball tournament. It's not going to be easy. Standing in their way are the twin pillars of New Zealand and Australia, who, between them, have had a stranglehold on netball since forever. Neither of these teams has shown any inclination of relenting.

The Jamaicans finished with the bronze medal at the last Commonwealth Games, but another third-place finish for the Sunshine Girls at this tournament will hardly be satisfactory to us. On the face of it, to finish third in a global tournament is commendable, but we have been there and done that. International netball is really about four countries. The gap between the top four and the rest is a yawning chasm. To finish fourth is, therefore, like finishing last.

When you add that two members of the team, Romelda Aiken and Jhanielle Fowler, are both playing professionally in the ANZ championship, the levels of expectation become even higher. What's more, for the first time, the highly rated Jill McIntosh is actually on the bench helping to decide tactics. When you throw all that in the mix, there is a greater pressure on this team to perform than any other netball team that has left Jamaican shores.

The future is in their hands

A disappointing performance here and the netball programme itself will take a hit. This current team, whether or not they are aware of it, holds the awesome responsibility of deciding on the immediate future of netball in the country. If they make it to the final, the popularity of netball will shoot through the roof.

If they should, by some miracle, win this tournament, the sport will take off at the grass-roots level. The team currently in Australia is, therefore, not merely challenging for a title; they are fighting to get the sport more relevant than it is now in Jamaica.

The team has its work cut out. We are on a collision course to face Australia in the semi-finals this Saturday, and if we somehow get by them, it's likely we will have to face New Zealand in the final. It's not outside the realms of possibility that we can cut down these two giants.

The Reggae Boyz have removed the monkey from their backs, of beating the USA in the USA in football. They got into the Gold Cup final for the first time. Maybe the gods are planning a parallel for the netball team. Maybe this is the time for the netball team to do what they have never done before - get into the World Cup final and beat New Zealand for the first time to take the title.

For that to happen, the team has to show the same intensity they did against New Zealand when we went down by seven points. We matched them stride for stride until we faded in the last five minutes. We played aggressive, in-your-face netball. We never appeared afraid of the Silver Ferns, never gave them the kind of respect previous teams have.

This means in theory that, if we get more balls up to shooter Romelda Aiken, we are going to be hard to beat. She shot 41 from 44 in that New Zealand game and is probably playing as well as she ever has and is arguably the best shooter in the game.

To get more balls to Aiken, our midcourt, which is not blessed with height, has to be decisive and fast. They can't afford the turnovers that plagued us towards the end of the game against New Zealand and indeed in that heartbreaking loss against England in the preliminary rounds.

The Girls must take on the mantra, 'yes, we can'. Netball Jamaica's legacy can be determined, one way or the other, by what unfolds over the next few days.