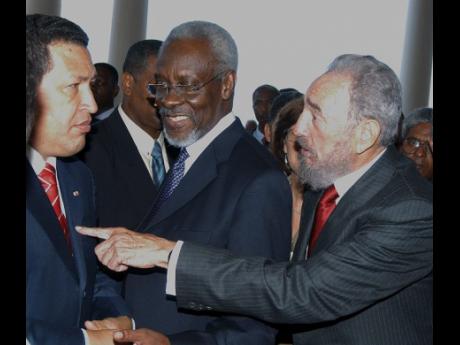 Contributed
In this September 6, 2005 photograph, Cuban President Fidel Castro (right) makes a comment to Venezuelan President Hugo Chavez (left), much to the amusement of Jamaican Prime Minister P.J. Patterson. The state heads, two now retired and one deceased, were enjoying a moment in-between sessions while at the Second PetroCaribe Summit at the Ritz Carlton Hotel in Montego Bay, Jamaica. 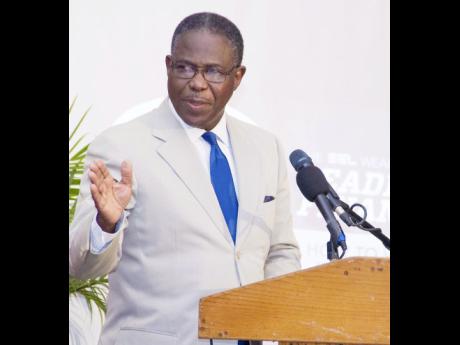 Faced with a national debt of more than J$2 trillion, the equivalent of 137 per cent of the national economic output, and debt-servicing cost, which, while declining as a percentage of GDP, is still twice as high as Greece's, the Government has been moved to act. It has bought back a US$3.2-billion debt at a 53 per cent discount for US$1.5 billion, a reduction of US$1.7 billion. This impressive-sounding debt buy-back was financed with a new debt of US$1.5 billion.

The transaction has set off an intense public debate in which the Government and Opposition have, predictably, taken starkly opposite positions.

Jamaica's debt portfolio is enormous, and the cost of servicing it crippling for a country whose economy has remained stagnant for a quarter-century. This requires a debt-management strategy that puts the reduction of costs on the economy as its main goal.

The buy-back of the US$3.2 billion PetroCaribe debt, and the borrowing of US$1.5 billion to finance it, though lowering the debt, may not have been the best way to achieve this goal.

A lower debt-to-GDP ratio will, indeed, result in a better credit rating and the opportunity to secure lower interest rates on new debt. However, if we assume that reducing debt is government's goal, new loans will only be taken to retire or repay existing ones. This will be gradual and fairly slow.

Reducing the size of the debt is important. However, where the Government has to retire debt or has the opportunity to reduce or replace debt, it must ensure that debt-servicing costs decrease as a result.

And this is where the interest rates on the new loans taken on to buy the PetroCaribe debt are important. The ballooning of the public debt to almost 150 per cent of GDP during the 1990s was substantially the result of rolling over debt at higher cost, creating a snowballing effect by taking on additional loans to pay interest on old ones.

One cannot reasonably argue against taking US$1.7 billion off the country's debt stock and lowering the debt-to-GDP ratio by 10 percentage points. However, assuming full principal payment at maturity, the cost of servicing the US$1.5 billion borrowed to buy back the US$3.2-billion PetroCaribe debt will cost the country US$71 million (J$8.3 billion at today's exchange rate) more in annual interest payments.

Financing this increased debt-service cost will naturally present a challenge to the administration. The public is entitled to know how these increased payments will be made without new taxes or further debt. We also need accurate information on the financial health of the PetroCaribe Fund, which the Government will be relying on to service it. Are the huge loans the Fund made to bail out insolvent public entities like Clarendon Alumina Production (CAP) really realisable assets?

At an interest rate of only one per cent p.a., the US$3.2-billion PetroCaribe loan is by far the lowest-cost debt on the Government's J$2.1-trillion debt mountain. The cost of servicing it was US$32 million per year in interest payments. The annual interest on the new US$1.5-billion debt created to replace it will be US$103 million.

There have to be very compelling reasons for liquidating the country's cheapest debt while leaving more costly debt on the books. It seems the principal reason for this move was that, in the absence of growth, it was the Government's only available means of reducing the debt-to-GDP levels as required by the International Monetary Fund.

But Jamaica's real problem in growing our economy is much less the size of our debt than it is the cost of servicing it. Yes, the lower the debt-to-GDP ratio, the better the country's credit rating is likely to be and the easier it is to borrow more. However, what is killing Jamaica today is the large proportion of its economy that must be used to pay interest.

The US$3.2-billion PetroCaribe debt represented an easily-reached, low-hanging fruit. It was held by a friendly government, and had a remarkably unrealistic interest rate of one per cent, an arrangement made, no doubt, to advance the geopolitical ambitions of the late Venezuelan president, Hugo Chavez. As a result, its current value is only 47 per cent of its nominal value: US$1.5 billion.

The Government might have gone about reducing the nominal size of the PetroCaribe debt with better results by renegotiating the debt with Venezuela. It might have started with the US$1.5 billion, which is what the US$3.2 billion debt at one per cent p.a. is really worth to Venezuela, based on Jamaica's risk profile. Had the Government proposed that Venezuela revalue the debt to that level, it could have offered an interest rate to match the discount rate the market would apply; so the real value of US$1.5 billion would be maintained going forward.

That rate would be in the order of 4.6 per cent p.a., which would increase Venezuela's annual earnings of US$32 million on its old US$3.2 billion loan to US$69 million on the renegotiated loan of US$1.5 billion.

For Jamaica's part, our debt would still be reduced by US$1.7 billion. Our annual debt-servicing cost would increase by US$37 million to US$69 million, but it would be US$34 million less than the US$103 million payable on the US$1.5 billion debt the Government created to do the PetroCaribe debt buy-back deal.

The net present savings to Jamaica over the life of this loan would be approximately US$400 million, around US$100 million more than the US$300 million that the Government's present deal saves. Importantly, under such an arrangement, the debt would remain a bilateral agreement with a friendly government, providing the intrinsically valuable flexibility that implies.

The view that the existence of the PetroCaribe Fund lessens the economy's debt-servicing burden is flawed reasoning. Currently, the Fund's resources are available to the country for other purposes. The extent to which it will be required to make additional interest payments will deprive the economy of the benefit of its previous use. Furthermore, the use of the Fund's earnings from loans made to local institutions does no more than move money from one Jamaican pocket to another to satisfy a foreign obligation.

Government decisions are usually influenced by advice received from people it chooses to listen to. My own experience in politics is that such advice, while probably well meaning, often reflects sectoral, corporate or personal interest. For this reason, while advice should always be sought, it is Government's job to examine it through the prism of the interests of those they represent - the Jamaican people.

In the case of the PetroCaribe debt exchange, it is by no means clear that the people's interests have been best served. What is beyond doubt, though, is that many individual and corporate interests will benefit from the issuance of new GOJ debt of US$1.5 billion. The ultimate holders of these bonds will, for the most part, be local interests, as has been the case with previous bonds that the Government floated on the international capital market.

Because of this, the Jamaican productive effort will again be denied valuable investment capital and the country's struggle for increased production will continue.

What is abundantly clear is that in causing US$1.5 billion of investable funds and US$71 million of increased annual debt-servicing costs to be attracted away from productive activities to finance the Government, the PetroCaribe debt buy-back could turn out to be more of a suppressant than a stimulant to the economy.

- Claude Clarke is a businessman and former minister of industry. Email feedback to columns@gleanerjm.com.