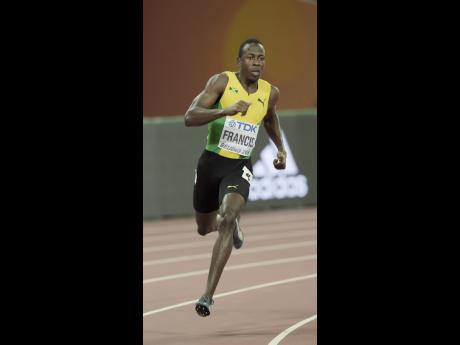 On Sunday I happened to be really disappointed by some of my colleagues in media. The one thing that should separate us from the layman is our ability to be able to look at an issue dispassionately and always make a rational call.

After that 4x400m race at the World Championships, too many sports journalists were putting the blame on Javon Francis for the way he ran his anchor leg. Too many of my colleagues were reacting emotionally after we lost out on a bronze medal by a whisker. As a result of our letdown, too many people who ought to know better have been talking nothing but pure foolishness.

Again, for the record, Javon ran 43.52 on his leg, the fastest he has ever run a 400m in his life, relay or no relay. Not only was it the fastest leg by any of the Jamaicans in the race, it happened to be the fastest time by any of the 32 people competing.

The track and field gurus have told me it's the fastest time ever run by an anchor-leg runner without him getting a medal. Only one Jamaican, we are told, has ever run faster on a 4x400m anchor leg. Taking all this together, to blame Javon, for us losing out on a podium finish, is the epitome of irrationality. Not only am I disappointed at some of my fellow sports journalists, I'm a little embarrassed at their level of reasoning.

A lot of people blaming Javon are suffering from one of the most common mistakes in sports - failing to put greater meaning and prominence to what happened late in a game as opposed to anything that happened earlier. It's what I would call a recency bias, where many of us are simply incapable of analysing a whole game (in this case, a whole race), and we, therefore, take the lazy and unintelligent route of focusing only at the end.

So, a basketballer with 45 points in a game but misses a shot with his team down by one at the buzzer, is the one who 'dash weh' the game if his side goes on to lose. The batsman who makes a double gets slaughtered if he makes a mistake and gets out with a few runs to go, even if all his teammates failed badly. None of this makes any sense at all. I can accept that, in these cases, the persons mentioned above would cause us greater disappointment than anyone else, but it's their teammates who failed, not they who gave away the game.

At the end of a game, our emotions are more charged. That's understandable. But we must not get into the habit of magnifying what happens at the end, as opposed to what happened all the way through. A game is won or lost on the cumulative happenings from the start to the finish, not on one occurrence at the end.

No objective analysis of the 4x400m can give Javon any more blame than his teammates. You can't be the best performer and be the most blamed. That is simply crazy. My friends in media should leave that type of imbecility in reasoning to the intoxicated man at the bar!

What was brought home here is that most of us feel there is a particular template to run the 400m. That template has been drummed into our subconscious for so long that we have now come to see this as the ONLY way. We feel 400m runners should run conservatively at the start and finish strong. Somehow, too many of us feel that that method is guaranteed to make you finish faster.

That's fundamentally flawed. It doesn't matter where you slow down and where you pick up pace. Nobody can run a 400m race flat out. Where you choose to pick up pace DOES NOT MATTER to the overall outcome. The 400m is going to be won by the person who ran the best time, and the best time does not depend on where and when the greatest energy is exerted. It doesn't matter the method.

Javon's method made him run faster than anybody in that race so, literally speaking, he had the best method in the race. Those who feel that he would have run faster if he had run more conservatively at the start, and kicked at the end, are guessing. Nobody knows that for sure. By going conservatively, he would be allowing people who are all faster than him, to get a head start that he may have been unable to peg back.

'Donkey Man' did his best and bettered everyone else. That should be the end of that.