The other leggo beast 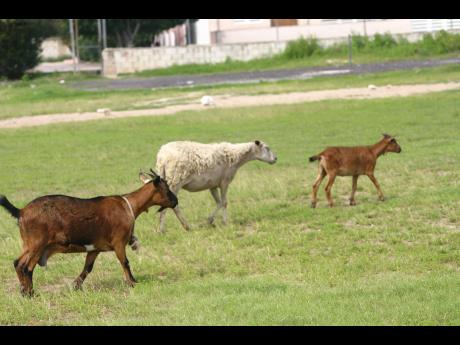 File
A sheep and two goats cross a playing field in Portmore during a game of cricket in 2005. Stray animals often wreak havoc on the flora of residences and present a danger to motorists.

In my life, I have had problems with 'leggo beast'. Yes, I have been a schoolteacher - both in Kingston and in rural Jamaica - but I didn't have significant discipline problems in my classroom or laboratory. It is where I live I that have problems with leggo beasts.

My wife and I have planted gungo peas in our backyard - and citrus and red coat plums and bananas - and stray goats have jumped over our garden wall and 'nyam dung everyt'ing'!

There is a category of penkeeper in our agricultural statistics called 'landless farmers'. They neither own, lease, nor rent any pasture land, but they own herds of cows and goats. They 'leggo' their beasts every day to forage for grass and foliage by the roadside or on open lots.

In days gone by, someone would follow the animals, to ensure they didn't damage or destroy anyone's cultivation, but those days are long gone. Today these leggo beasts wander where they will, and eat whatever they can get their teeth into.

Jamaica has long had laws to deal with stray animals. It is legal to shoot or otherwise kill small stock found trespassing - stray cows and horsekind may not be injured in any way, but must be taken to the nearest animal pound where they will be fed and cared for until their owners come to reclaim them (and pay whatever fines and fees are charged).

The difference in approach towards small and large livestock is because wandering sheep, goats and pigs are usually the property of the poor and, therefore, may be killed if they stray into the cane pieces of wealthy planters. Large animals, like cows and mules, were assumed to have strayed from the pastures of large penkeepers and, therefore, their investment should be protected. Such are the class origins of many of Jamaica's laws.

But things have changed. If you see a cow wandering along the roadway, it almost certainly belongs to a landless farmer, not a 'big man'. Because of this, the government no longer operates animal pounds.

What is a householder to do about stray goats and cows? I remember, as a very young person on my first trip to North America, asking my parents: "Why don't they have fences around their houses?" The answer was, because they don't have leggo beast wandering around. It looked so strange, those residential neighbourhoods in the United States and Canada, without fences or walls. It is the constant presence of leggo beasts (both the two-foot and four-foot kinds) that has forced us Jamaicans to imprison ourselves. There are no fences or walls around individual dwellings inside our fancier prisons - gated communities.

If I, as a householder, should kill the goats that jump over my wall and fence and eat my carefully planted and tended crops, would I be guilty of oppressing poor people? Are poor, landless farmers oppressing me? What is to be done?

Should the government place a ban on farm animals in urban residential areas? Is it fair to the landless poor to require them to transfer their livestock to properly fenced pasture land in peri-urban or rural areas? Is it fair to urban dwellers to have to contend every day with wandering cows and goats? Are these stray animals a threat to public health? My pet dogs have picked up ticks from the stray cows. What about lyme disease?

When I travel overseas, and the immigration/customs form asks whether I have been on a farm or have been exposed to livestock over the last two weeks, what do I truthfully say?

I know the PNP loves the poor, but they cannot love the way their leggo beasts behave. Come now, Minister of Health. Come now, Mayor of Kingston, what say you about this?

Of course, the problem is not with the leggo beasts themselves, you can't blame the 'dumb t'ing dem'; the problem is with their owners, who do not properly care for their animals.

The trouble is, this problem of leggo beasts affects us all. It affects the private purse and it affects the public purse. It cries out for a national approach, rather than for individual persons - and schools - to find their own solution.

• Peter Espeut is a sociologist and rural-development scientist. Email feedback to columns@gleanerjm.com.