The Gavel: Well done, Pryce, but no Senate seat 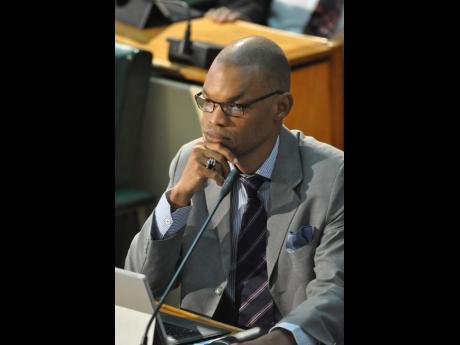 It is an open secret that the prorogation of Parliament is not far away. In fact, Prime Minister Portia Simpson Miller has told supporters of her political party to get ready for the sound of the trumpet, which would signal fresh elections.

We already know that Raymond Pryce, who has represented North East St Elizabeth since 2012, will not be among those returning to the House of Representatives following the polls. Pryce, a government backbencher, fell victim to internal party democracy and will not be on the ticket of the People's National Party (PNP) when the next general election is held.

Few will disagree that Pryce's demise will be a blow to parliamentary discussions. Not only was he an active backbencher, but he also dared to challenge the establishment, constantly agitating for change within national life.

In his short stint as member of parliament (MP), Pryce has moved at least three meaningful motions which have forced the society to stop and take note.

There was the matter of the decriminalisation of marijuana, as well as a motion which seeks to require civil society groups - in keeping with emerging global financial and ethical requirements - to vouchsafe and protect Jamaica's democracy, which have taken centre stage in public discourse. Add to that the need to repatriate the country's democracy, beginning with removing the Queen from parliamentary affairs.

Pryce, though, is leaving Parliament without being able to accomplish his dream of having the annual Throne Speech renamed The People's Speech, despite the House of Representatives approving his motion.

In addition to renaming the Throne Speech, Pryce joined the likes of Ronald Thwaites in agitating for the prayer, which is read at the start of each sitting, to be amended.

"I also notice that the prayer that called the session together, not only included a prayer for the Lady sovereign Queen, but her husband, her son, and her family. I would one day be so happy to hear in the prayer, instead of the references to the monarchy, and the monarch's family, reference to the Jamaican family," Pryce once told The Gleaner.

It appears that the monarch will outlive Pryce in the people's Parliament.

At the committee level, Pryce was sharp, well-prepared and probing. He was not a partisan hack, and appeared sincere about enriching the country's democracy.

But Pryce was not perfect. He speaks well but has a serious disagreement with simplicity, which at times borders on showboating. This trait caused the North East St Elizabeth MP to fumble badly when he attempted the Lord's Prayer at a committee meeting once.

A simple rendition of the prayer would have spared his blushes.

We would not be surprised if, even at this late stage, Pryce is whispering a silent prayer in His ear, hoping for the opportunity to have yet another go at being a legislator.

It is, however, no use crying for Pryce. The principles of democracy dictate that those persons who fail to stay close to their people will be removed.

That is perhaps why there are serious questions about the future of government MP Lisa Hanna, Damion Crawford, Lloyd B. Smith, Dr Lynvale Bloomfield and Patrick Atkinson in the Parliament. All five are facing internal challenges and, like Pryce, may not even get to face the voters.

There have been suggestions that Simpson Miller should reserve a Senate seat for Pryce in the next Parliament. The suggestion, no doubt, has buttressed by this tendency within our political system to use political rejects in the Senate to give them either a safe landing to retirement or to set themselves up for a comeback. It is also used as a training ground for aspirants.

examples of the latter. They were rejected by the voters in 2011 yet rewarded with Senate seats. The end result, however, has been that partisanship and grandstanding has given way to rigorous debate in the Senate.

I yearn for the day when political rejects are not included in the Senate. This would include Pryce, notwithstanding his brilliance. In fact, we should get to the point where the Senate becomes an elected House, too. It is not good for democracy that people who have not been elected by the people, and are accountable only to political parties and special interest groups, get the opportunity to overturn the actions of the people's representatives.

Our electoral and constitutional reform should head in that direction.