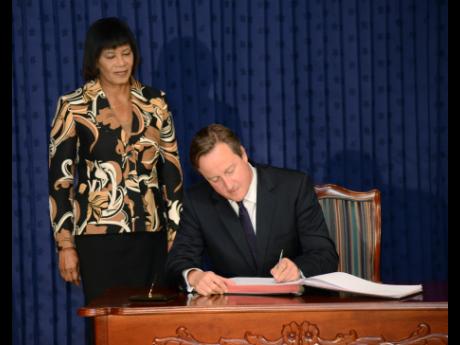 A full-throated apology for slavery from David Cameron would have been enhancing moral dimension to Britain’s move to reset its relations with the Caribbean. While admitting to slavery’s abhorrence and wounds it left, he stopped short of a formal apology for the UK’s part in it.

He suggested it was time to move on.

Given the growing assertiveness of the reparations movement in the region and the official commitment of Caribbean governments to the cause, Mr Cameron – and regional governments, were they so minded - might find it not so easy to extricate himself from the issue.

Yet, Wednesday’s speech by the British prime minister to the Jamaican parliament was sufficiently tangible to indicate that after a generation of a lukewarm diplomacy, the UK is again ready for a meaningful engagement.

There has been cynical derision in some quarters of his announcement of a £25 million grant to build a new prison, to which up to 300 Jamaicans serving time in UK jails will be relocated in 2020.

But whatever the British motive behind the deal, Jamaican’s Dickensian prisons are not only old and overcrowded, but incapable of rehabilitation as correctional facilities worthy of even the 19th century.

That has been so for decades, but our government has been unable to afford new prisons.

In any event, it is not only the financing of a new prison for Jamaica that Mr Cameron placed on the table.

There, is too, £300 million (J$54.5 billion) grant funding for infrastructural projects in the region, plus another £60 million for the upgrading of health facilities as well as to support governance and export promotion projects.

These outlays will quadruple British aid allocation to the Caribbean, not taking in another US$9 billion the UK proposes to spend in poor counties over the next five years to help them to adapt to climate change, from which the region can also benefit.

Two things are immediately obvious: Mr Cameron’s initiatives and how Jamaica and its partners in the region should respond to them.

The first is Britain’s clear preference, as is increasingly the case with other developed nations, to deal with the Caribbean as a group, rather than as bilateral partners.

The need here for the urgent resuscitation of the Caribbean Community (CARICOM) and the regional integration project, for which Jamaica, even as it pursues its own interests,  must assume leadership as the community’s most politically influential member.

In that regard, we again urge Prime Minister Portia Simpson Miller to quickly engage Keith Rowley of Trinidad and Tobago, the community’s strongest economy, to begin the CARICOM reset.

The issue is for Jamaica and CARICOM to appreciate that Mr Cameron’s initiatives do not rest merely in altruism. He is being driven by two distinct, but related dynamic: one geopolitical, the other internally economic.

While Britain maintains interest in the region, it appreciates it has lost ground to an aggressive China, which has invested heavily in the region, as well as neighbours like Venezuela, which has helped to prop Caribbean economies with its PetroCaribe oil facility.

Then there is Mr Cameron’s intention to nearly double Britain’s global export to £1 trillion over the next five years. Access to stable and vibrant Caribbean markets is part of that strategy.

Jamaica and the Caribbean have to ensure the trade flow one way and the some of the sucking sound comes our way.