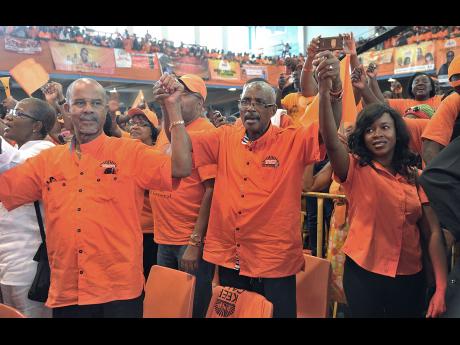 Norman Grindley
Hands joined in unity Comrades lift their voices as they sing the party's song at its recent annual conference.

It seems that it was not so long ago that an MP being challenged in a selection or ratification exercise could call upon the good graces and some cash from party central to assist him in his internal campaign to retain the chairmanship and, hence, the right to run again under the colours of his party.

Those halcyon days are long gone, and a party in power like, say, the PNP, is not exactly flush with spare change. It is usual that cash will be naturally attracted to the party in power so, for the Opposition JLP its coffers are filled more with echoes than thousand-dollar bills. The PNP has the edge there.

Both political parties have their key centres of influence, and it is these individuals who are the money magnets. The problem is, a big businessman, Mr A, will give a million dollars to a centre of influence for 'party purposes', but under our lax party funding laws, there is no guarantee that the entire $1,000,000 will make it into the bank account at party central.

Some of the funds may make it to the particular constituency account or, some of the cash may make possible a weekend junket in Miami with a girlfriend.

A non-brand name person trying to secure the opportunity to enter representational politics either to serve his constituents or to use the machinery of party politics and the State as vehicles for his personal cash cow will have to identify his funders early and have them on board.

In a cash-stagnant economy, as party central finds it much more difficult if not an impossibility to bring funding solutions to key caretakers and MPs, the vacuum is oftentimes filled by heavy-pocketed pretenders and charlatans personally seeking MP status. The sad thing is, the party secretariats can do little about it, and the safe way out is to conveniently turn a blissfully ignorant eye to the happenings.

This forked-tongue approach from both parties accept the fine words spoken loudly about accepting no dark money while silently taking in the cash which swirls and keeps business alive at street level. The message from party central is, if a challenge is about to occur, we do not wish to know if the person is clothed in goodness or weighed down in a heavy cloak of iniquity.

Just get it over with quickly and make a good show of democracy in action. After it is over, we will sign off on the details.

A few weeks ago when St James Central PNP delegates rejected sitting MP Lloyd B. Smith, he cried foul, called it "a travesty of democracy", spoke of skulduggery and corruption and threatened to 'go public' if the party did not address the issues he raised.

I am not making a point that dark money was involved in the delegates campaign to rid the seat of Lloyd B. Smith but, like his promise, as a journalist in 1999 to tell all he knew about the infamous Street People Scandal, we knew it was all mouth and that the sad and lonely man who used to be an MP was just making some noise.

When I challenged Lloyd B. Smith in a thread on Facebook, he responded poorly but predictably so. My point was that he gained the original selection in 2011 in a system not too far removed from the present. So to me, he was bawling because he lost.

He insisted that the process in 2011 was 'clean', so there was no need for tears of sadness. It didn't occur to him that if the system devolved into 'skulduggery' and 'corruption' under his watch, he had to bear some of the responsibility for it. Plus, the public had a right to know the specifics of which he spoke. No such luck.

Are we still on

for this year, Portia?

A week ago, a first-time caretaker trying to win in a poor, rural constituency sat on a section of my balcony and expressed his lament. "Mark, when is the election? I just want it to happen and get it over with. It is sucking out my soul and it is draining my pockets. Seriously, each day it is agony to go to the constituency and witness the stark levels of poverty."

I tried to respond based on what I thought I knew. "If Portia has good poll numbers and, the trends from, say, six months ago to now are heading in the right direction for the PNP, the lady may call it. But the situation is still fluid, especially with the turmoil in various constituencies which has spilt over into the public domain.

"Were I the PM, I would be thinking that maybe those poll numbers are tentative because people are really hurting in this economy. Do I go for November before the JLP conference? Do I wait on the conference, conduct another poll to determine how firm my numbers are alongside an expected bump to the JLP?"

Recent poll numbers in terms of the PM's performance ratings or favourability factor indicate that the PNP may be slightly ahead of the JLP. On the assumption that there is correlation between leaders' favourability ratings and party strength, a few months ago Portia was in the doldrums in comparison to Holness when the PNP and the JLP were in a statistical dead heat.

In other words, the PNP was scoring better than Portia, so if Portia scores higher in present polling, the PNP ought to be in safer territory. Of course, there is the possibility that the relationship between the two factors may have changed over the last few months.

It is in the context of reparation claims and David Cameron's lecturing us to "move on" from slavery that makes the prison offer so offensive.

And you are telling me that Portia and her PNP administration did not know there would be likely political fallout?

At the same time I do not blame the Opposition JLP its opportunity to exercise political hypocrisy and act as if the prison matter had not been in the planning for nearly a decade.

Mid- and late last week, pollsters were out in the field, but one suspects that the questionnaires were designed before Mr Cameron made his offensive offer. Again, were I the PM, I would want to know if the PNP's association with 'accepting the prison offer' has hurt the PNP in the minds of the voting public.

Many people at street level and in uptown living rooms have expressed anger, and it ought to be incumbent on both political parties for their own benefit to get a sounding on this via opinion polling.

If the PNP allows the JLP the luxury of holding its November conference, a number of factors may trip in. The JLP could enjoy a bump in the polls and that could be embellished with the Cameron prison offer. At the same time, a huge conference, bigger than the PNP's, would deplete the JLP's coffers.

The ruling PNP could spring the ultimate surprise. Go into next year, say to February, and hope that the PNP's political and electoral fortunes increase while a longer campaign sucks the soul out of the JLP.

New beginnings versus old concerns in 2016