Editorial: Challenge of getting the gun 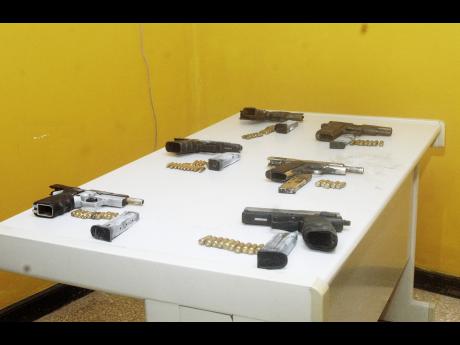 Skeptics among us may well ask why is so much optimism riding on the current 'Get the Guns Campaign' when so many other previous attempts have had only limited success?

Police Commissioner Dr Carl Williams may point to the numbers in response. Nearly 70 firearms snatched from the hands of criminals in about three weeks, spells success. And Williams and his team are anticipating greater hauls in the future.

Another thing that is different about the current campaign is that the Jamaica Constabulary Force (JCF) has reached beyond local shores to nearby Haiti where some of the weapons are believed to have originated as part of a flourishing drug-for-guns trade with Jamaica. Indeed, an alleged dealer was recently killed in that country by the Haitian authorities.

In order to curb violence fuelled by the gun, it is important, we believe, to understand how the guns got into the hands of criminals in the first place. Do the majority of firearms recovered at crime scenes and taken from criminals originate from Haiti?

The skeptics might point to the fact that long before Haiti even entered the arms trade, guns and ammunition were pouring into the island from the United States of America. Data for 2011, provided by the Bureau of Alcohol, Tobacco, Firearms and Explosives (ATF) confirmed that 80 per cent of the guns recovered in Jamaica originated in the United States (US).

Like Jamaica, many other countries in the region have seen their economies battered by the effects of crime and violence because money has to be diverted from productive use to deal with crime and security measures.

Take Mexico, which has also felt the sting of violence fuelled by guns smuggled into their country. The ATF has confirmed that 70 per cent of the guns and ammunition that were recovered in Mexico were manufactured or assembled in the US where arms, including military-style weapons, are available for civilian purchase.

Given such hard evidence, Mexico got the US to expand eTrace - an electronic firearm tracing and analysis system - by deploying eTrace technology to US consulates in Mexico and teaching Mexican police how to use eTrace. Under the Merida Initiative of 2007, eTrace technology was also made available to help other countries track the path of weapons from manufacturer to sale and distribution.

Despite eTrace now being used by about 30 countries, and other initiatives, between 2010 and 2012, only 13 per cent of an estimated 250,000 weapons smuggled into Mexico were intercepted by their government and a mere two per cent by the ATF.

Lax oversight in the US and a seeming reluctance to interrupt the commercial prospects of gun manufacturers has long weakened the credibility of the US response to the gun-smuggling problem.

With thousands of lives shattered by the gun, and the resultant pain and agony to the victims' relatives since more than 66 per cent of deaths, each year, are attributed to gunshot wounds, we need a multi-focused strategy to reduce criminals' access to guns.

One of the components of a 2012 cooperation agreement between the US and CARICOM refers to the establishment of an exchange programme that allows Caribbean law-enforcement officers to work with their colleagues in the ATF. This must be pursued with all urgency.

And here at home, families need to be educated about the perils of gun violence and the dire consequences of harbouring criminals and/or hiding weapons. As many others have suggested a gun buy-back programme may also help in getting some of these illegal weapons off the street.

Williams might quickly point to the 10 spanking new boats recently gifted by the United States Government which will put Jamaican law enforcers in a better position to apprehend gun smugglers on the high seas. The effects may not be felt immediately, but vigilant and honest officers could make a huge difference to this campaign.