Why the PNP still has the advantage 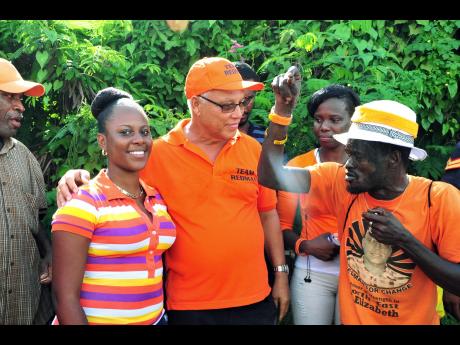 Paul Clarke
Evon Redman surrounded by his supporters after being given their backing to be the PNP’s candidate for North East St Elizabeth.

As the election campaign season heats up and the emotions among partisans on both sides of the political divide slip into the frenzy gear, many seem not to realise that their own energy levels, if taken no further than friendly sniping across the fence, cannot make for an election win.

It takes a little more than that, in fact a lot more. If traditionally, you have PNP voting tendencies but find yourself easily slotted into the column of those who have felt let down since your dear party won in late 2011, you will still have the tendency to vote for your party but you want a little hop, step and jump convincing.

The thing is, you need a few more weeks of community interaction with your MP and more importantly, a specially charged set of national political stump speeches from your prime minister to reassure you, at the last-minute, that some of the deliveries postponed since 2011 still have a chance of being felt should your vote give her power just one more time.

It will not be easy for you to vote for the JLP. To do so would be to breach some divine law of party politics, to bring stain to ones voting slate. But, if the PM cannot carry her energy to you and make you want to walk that short trip to the voting booth, a painful but easy option is to stay home.

If you have always felt comfortable voting for the JLP, this PNP administration is the epitome of governmental incompetence. The IMF may or may not be an important consideration for the time, but, for you, it makes no sense to continue with the PNP as its model of stabilisation postpones, for too long, the quest for real economic growth, more jobs, more money in your pocket and less concern that a family member will be murdered next week.

At the same time, you may be one of those who have concerns with the leadership of the JLP. But even if you don't, in the back of your mind you may find it easy to harbour thoughts that the JLP election machinery may not be in tip-top shape and that its depleted cupboards may not carry it all the way to election day.

You want to vote JLP but you have not yet felt that twitch in your right finger to do so with urgency. You could be thinking that if the PNP, with state power, has, at its disposal, cash to purchase its rights to an election win, it will do so and render a vote by you a wasted flourish.

If you are among that rarefied sector where most wish to make a good pretence that a vote has to have some policy or developmental aspect attached to it, or even a far-flung philosophical core within it, you are in the middle of a muddle.

The PNP is sorely lacking in leadership and the preaching of party philosophy from the front. Prime Minister Portia Simpson Miller has taken for granted a nation of people who still have more than a flicker of love for her. Instead of using the vast political capital she had stored up over the years leading to her stint as PM in 2006 she has instead chosen to 'lef it up' and operate as if she had a coronation in early 2012 and a reign was all that was needed and sought.

How the JLP can

The 'independent' voter is a strange breed. He also has 'diehard' tendencies but, the main difference is, his adherence to one particular party occurs in significantly much shorter periods than a lifetime.

A few months ago as the JLP headed into another destructive spiral inside of itself I told a few friends and my ex-wife that I had made up my mind to vote PNP in the next elections. My ex-wife has long become a Portia loyalist.

At this very moment, that voting intention is very much up in the air especially as the PNP has demonstrated to the nation that some of its own well concealed organisational weaknesses and cracks in the cohesiveness armour may have spilt over into government and that could be an explanation for its poor governance in many areas.

I want to send a message to Portia that I am displeased although not that much disappointed. I am not so disappointed because I did not expect much from whichever party was elected in 2011. I knew that the narrow fiscal space in an IMF regime would create its own restrictions of growth and development.

But I also want to send a message to Andrew Holness that he has not in any way demonstrated to me a newness that makes my vote for him worth more than the ink on a finger. My big fear in voting for the JLP is that should it win, it is likely to begin life as an entity made up of too many disparate elements who may be sidestepped into chasing positions of power instead of actually governing.

Another consideration is, I actually want my vote to count. If I believe the JLP has a losing message, a losing team and more than a tinge of desperation in its campaign promises like the promise to remove all auxiliary fees associated with secondary education, I may be tempted to look somewhere else.

If I believe that the coffers of the JLP are too bare to take it all the way through I may be forced to look to the PNP, stare beyond its poor leadership and consider the likelihood that it has a better chance of forming a more cohesive team than the JLP in the post 2016 period.

JLP should market polls to the private sector

Both polls from the two main pollsters are saying that both political parties' leaders are in the dump, the electorate is basically turned off from pedestrian politics and, the ruling PNP deserves a voice of disapproval from the electorate.

The main danger to a JLP desperate to gain another foothold on power, and a leader fighting for his political life, is that PNP voters are more forgiving of their most recent vote with about 95 per cent of PNP voters showing a tendency to vote again for the PNP as against under 80 per cent of JLP voters indicating they will do so again.

The basic rule is, the longer a party holds power the easier it becomes to believe it has the right to hold on to such power. After a while that behaviour is transmitted to the PNP voter who in time becomes a stronger supporter of his party than the JLP voter supports his party.

At the same time, the longer a party holds power, the easier it becomes to snatch back lost power (2011) the irony of losing it also becomes easier as the frequency of failed expectations increase.

Pundits who are reading the economic tea leaves and the global positioning of developing states vis-a-vis the increasing emergence of China, and United States concerns over the Asian giant's influence in its 'Monroe Doctrine' backyard, will know that whichever party takes power after the next elections it is likely that the demands/delivery ratio will make for the survival of only one term.

Andrew Holness needs to gather his team around him. Get the upstart from West Portland, the ever popular in the east, and the fiercely independent MP, Daryl Vaz, to sit at a table with him and convince Vaz that it is entirely possible to go forward without Shaw as the party's leader.

To me the JLP cannot make it around a common table without Vaz because it is only in this way that the JLP will be able to convince the private sector big boys that funding the JLP's campaign is not throwing good money after bad.

An independent voter like me wants to be moved from only seeing post 2016 viability of a PNP administration. I also want to see the instant readiness of a likely JLP administration. One part of that readiness is the ability of the JLP to fund its way from Sunday all the way to the next elections.

In a statistical dead heat between both parties, the PNP has major advantages. One, it has the imprimatur of the IMF and, it has been able to convince the big money sector to fund it. Two, it may promise as much to the contrary that it won't but, the PNP administration will find a way to use state funds to its advantage.

Many believe that the PNP has made a muck of governance. The JLP needs the launch of a strong machinery leading a strong and united organisation to offset the PNP's stale but probably realistic message that the 'fundamentals' have finally lined up.

If the JLP cannot collect between $100 to $300 million from the private sector big boys over the next two weeks, no amount of noise in the marketplace of political 'tooing and froing' will make a difference.

The polls present the best and last chance of having this achieved and the reality is, Andrew Holness is now immovable.

- Mark Wignall is a political analyst. E-mail feedback to columns@gleanerjm.com.