A tribute to Graham Serjeant, researcher in sickle-cell disease 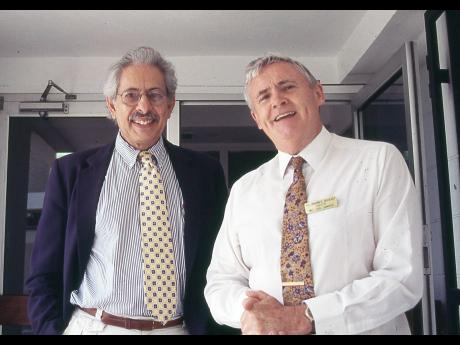 Contributed
John Homi and Graham Serjeant at the Sickle-cell Unit at the University of the West Indies.

The distinguished tropical surgeon Imrie Loefler said, "I would like to be remembered as someone who did good things occasionally and was useful to society." A life spent contesting lethal challenges generates self-effacing philosophy. Sickle-cell disease is known to many as a lethal tropical disease. Graham Serjeant has changed the face of sickle-cell disease. He received an Honorary Order of Jamaica (OJ) for outstanding research in sickle-cell disease. Honorary awards are conferred on distinguished citizens of another country who have made a significant impact on national life.

Professor Serjeant has spent almost all of his working life in Jamaica doing clinical research, and he and his wife Beryl have adopted Jamaica as home.

Serjeant was born in Bristol, England, and trained in medicine at Claire College, Cambridge. His first post in Jamaica was senior registrar in medicine at the University Hospital, Mona, in 1966.

From 1967-1971, he was appointed welcome research fellow. After a one-year stint at the Abnormal Haemoglobin Unit, Cambridge, Serjeant and his wife returned to Jamaica to commence work in sickle-cell disease. He was appointed director of the Medical Research Council Laboratories (Sickle- cell Unit) in 1974 and was appointed honorary professor in the Faculty of Medicine, Mona, in 1981.

After Serjeant's retirement from the University of the West Indies in 1999, he was appointed professor emeritus, and his sterling work in sickle-cell disease continues through the Sickle-cell Trust, 14 Milverton Crescent, Kingston 6.

Serjeant diagnosed over 300 such patients at birth while screening 100,000 babies at the Victoria Jubilee Hospital between 1973 and 1981. From this cohort, crucial lifelong scientific data were derived as these patients grew through childhood into adulthood.

Any attempt to capture the impact of Serjeant's work on the treatment of sickle-cell disease using this medium would be ludicrous. Suffice it to say, Serjeant's research dwarfs all other research in its positive impact on pain and survival.

His objective of documenting the natural history of sickle-cell disease in a cohort of individuals was ambitious for its time. His philosophy has always been to derive useful methods of prevention and effective modes of treating complications. The methods he pioneered were generally simple, cost effective, and low technology, making them particularly useful to limited-resources countries, where sickle- cell disease is most prevalent.

Two examples come to mind that illustrate the power of Serjeant's philosophy of promoting patient empowerment and simple methodologies. By teaching mothers how to examine their children for an enlarged spleen, mothers were able to detect early signs of blood pooling in this organ. The entrapment of blood in the spleen of patients with sickle-cell disease was at one time the commonest cause of death in the first year of life. Due to wider and earlier detection by mothers and simple surgical protocols, deaths from blood pooling in the spleen fell by 90 per cent.

Serjeant and the late John Homi CD (Hon) advocated simple measures during anaesthesia, including a careful and smooth anaesthetic technique, adequate oxygen administration at all times, adequate hydration, avoidance of cooling, knowledge of steady state haemoglobin status, and selective use of blood transfusions.

The newly understood dangers of overtransfusion have proved Serjeant's championing of selective transfusion to be prophetic.

On a more personal level, Sergeant has facilitated the professional advancement of countless specialists in training who chose to rotate through the Sickle-cell Unit. In so doing, they became exposed to the rigorous research methodology of the unit. Physicians he has mentored occupy the most senior research positions internationally. I would hope that unlike Loefler (the late Hungarian, American-trained surgeon who spent his professional life contending with tropical diseases in Africa), Serjeant's parting wish will not reflect understated achievements.

- Newton Duncan is professor of paediatric surgery at the University of the West Indies.