Ruddy Spencer has his hands full 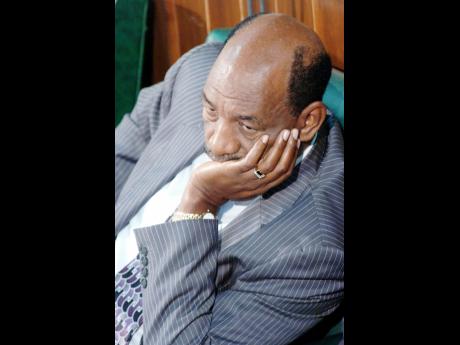 Rudolph Brown
Ruddy Spencer will be up against the Duncan clan.

It was in early 1993, and I was seated downstairs waiting on the arrival of Hugh Shearer, prime minister in the pre-1972 period, and, at that time, MP for South East Clarendon.

A few weeks before, he had commissioned a constituency poll, the results were compiled in a report, and the details didn't represent good news for him. Prior to his arrival, he had telephoned and had been made aware that it was not all wine and roses.

He was facing a young PNP upstart named Peter Bunting, and, based on the poll findings, JLP icon Shearer was about to lose his seat. If my memory serves me right, he didn't bother to read the report at the beginning but went straight to the penultimate page to pore over the party standings.

"So, a going to lose," he said as if he was both asking a question and arriving at a conclusion.

"Bunting has been running a real high-tech campaign," I said. "He has television and DVDs in bars and shops all over the main centres in the constituency, and somehow, he has been able to convince the owners to pump out those items promoting him. He has a real presence all over."

Shearer was a man liked by many across the political aisle, and as he glanced at a few more pages, the grand old man of JLP politics and BITU fame smiled, gave just the slightest shrug of his shoulders, shook his head, and left.

And, of course, after the March 1993 election, South East Clarendon had a new MP in Peter Bunting, another seat taken by the victorious PNP under the leadership of P.J. Patterson.

The seat's current member of parliament is the JLP's Ruddy Spencer, another quite likable guy who barely scraped home in the 2011 election by 107 votes. A few years ago, we spent a brief moment at a bar at the Pegasus over a few glasses of wine, and I couldn't help but ask him about the rumours that he was the late Hugh Shearer's son.

"I have heard it so many times," he said. "Absolute rubbish!" Spencer is an easygoing sort, and unlike a few of the older politicians in the JLP, he does not come across as abrasive and arrogant. In the half-hour or so we spent at the bar, we spoke about just everything else but politics.

With Spencer winning by 107 votes the last time out in a constituency that used to be considered the 'sugar belt', where the JLP affiliate union, the BITU, once reigned, the PNP is convinced that at the next election, South East Clarendon will return to the PNP.

If early indications of another active 'presence' in the constituency by the PNP's Patricia Duncan-Sutherland are anything to go by, I would advise Mr Spencer to get out every high-tech tool he knows of if he doesn't want a repeat of what Bunting did to Shearer in 1993.

Spencer, I am certain, does not yet want to be seen as a political relic holding back his party. He needs another victory, but from where I sit, it is not going to be a walk in the park for him.

First, it was the chik-V outbreak in 2014, which took the nation by storm, even though the health ministry had been warned of its pending arrival from 2012.

When it did arrive and had wreaked its knee-bending and joint-paining havoc on a majority of Jamaicans, many of us were surprised when we were later informed that the ministry had known all along but had failed to adequately engage the nation.

When it did arrive, many Jamaicans took to what they knew best: bush medicine. From papaya leaves extract to kola nuts (bissy) to powdered avocado seeds. Like many, I was also affected and spent close to a week swallowing gallons of water and feeding on mild painkillers.

It was many months before the pain in my elbows decided that it was a good time to leave me.

Just last Thursday, a doctor I know told me that she was aware of 60 deaths arising from the intermix of chik-V and heart problems. In early 2015, another doctor, who is an administrator in the Ministry of Health, told me that there were "many deaths", but no one was prepared to come forward and toot a whistle.

Now the nation is again greeted by another shocker. Eighteen newborn babies more prone to infection because of low body weight and birth prior to full term died after contracting two bacterial infections.

No one is saying that Minister Fenton Ferguson should be directly blamed for these tragic deaths at the University and Cornwall Regional hospitals. Based on what has been deduced so far, some basic approaches to infection control were breached, the main ones being early detection, isolation of patients, and screening of medical personnel.

It is my understanding that sometime in the mid-1980s, an infection was identified among a few newborn infants at the UHWI.

According to a doctor who was there at the time, "We immediately removed those identified with the infection and moved them to a ward we had created just to hold them. Then we instituted the protocol that is normal. Those who were working at the nursery nearby could not easily move between the two groups. Special protocol involving the changing of gloves between patients and constant hand-washing were instituted."

To the extent that Minister Ferguson is at the top of the ladder in this cannot be easily placed aside. What galls me is that the minister was only made aware of the matter months after it was exposed in a newscast.

But, additionally, with the botched chik-V outbreak, we have identified the minister's modus operandi. He seemingly prefers to respond to crises instead of insisting that systems are in place to avoid or lessen the extent of those crises. No one expects the minister to micromanage.

For that alone, I believe that he deserves to be separated from his post. Even from a purely political standpoint, the PM has much to gain from securing Minister Ferguson's resignation. The minister is highly unpopular for justifiable reasons, and the PM should pounce on this moment.

The PNP's Paul Buchanan surprised many pundits when he snatched the West Rural St Andrew seat from the JLP's Andrew Gallimore in the last general election by 237 votes where the turnout was a low 47 per cent.

The first-time MP now has a chance to do it a second time, but he is running against a runner in the JLP's Juliet Cuthbert-Flynn, an Olympian, and he will need all the legs that he can get.

Both candidates are a study in contrasts. As with many other politicians, it is most difficult to contact Buchanan by telephone, so one assumes that he is in the trenches not just trying to defend his close win, but making a special effort to up the ante.

Cuthbert-Flynn has a very active presence on Facebook, and one assumes that she knows the specific profile of the electorate across the four divisions and what it takes to engage them to the point of securing their votes on election day.

West Rural St Andrew is a mix of affluent, middle-class, semi-rural working class and small-town 'in-between' class. When the JLP won the general election of 1980, it was the first time that the middle class had turned out in droves to vote for the JLP.

They did this because they were convinced of the communist bogey man actively pushed by Eddie Seaga as a real threat, but, most important, at that time, the country had slipped into full-blown chaos. Voting out the PNP was seen as one way to stop the chaos.

Since then, the JLP has enjoyed a majority support of the middle class, but decreasing turnouts of that class has been a problem for the party.

For Cuthbert-Flynn to take back this seat, she will have to hope that the middle class in Red Hills and Stony Hill divisions turn out in larger numbers than they did in 2011. If that doesn't happen, Buchanan is likely to make it to Gordon House again.