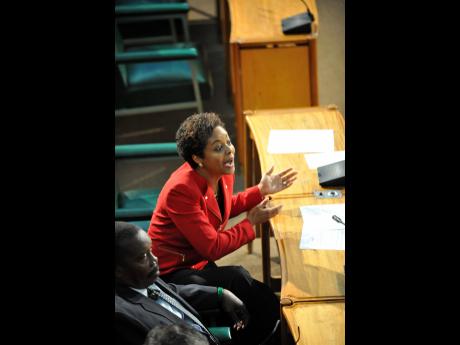 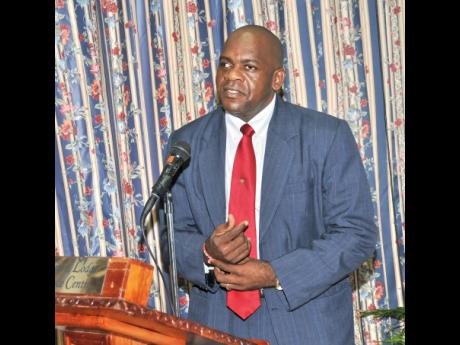 PRIOR TO returning to the chamber of the Senate after members voted to suspend her on Friday, Marlene Malahoo Forte was gone for about 30 minutes.

Fifteen minutes elapsed between the time Senate President Floyd Morris first sent the marshal to summon Malahoo Forte to return to the chamber and the motion which was moved for her suspension from service to the Senate.

Malahoo Forte had been gone from the chamber for about 20 minutes, having slipped out shortly. The Government used its majority to pass a bill entitled an Act to Amend the Office of Utilities Regulations Act.

She left about the same time as fellow opposition senator Robert Montague and about five minutes before Tom Tavares-Finson, the leader of Opposition Business.

So any suggestion that Malahoo Forte had merely left the chamber briefly does not accord with the facts.

Her departure and that of Montague and Tavares-Finson left the opposition bench empty for much of Wentworth Skeffrey’s contribution to the Caribbean Court of Justice debate.

Friday’s sitting, however, was a lengthy one in comparison to others, but it did not go anywhere near the 3 p.m. cut-off time provided in the Standing Orders.

But, as has been customary, the 1:30 p.m. lunch time was delayed. In fact, two hours, 25 minutes into the sitting, a motion was approved for the lunch break to be delayed.

Having been the first person to show up for business in the chamber last Friday, Malahoo Forte may, in fact, have been hungry, and this may be the reason the marshal located her in the dining room on the two occasions Morris sent for her.

That said, however, I was taken aback when A.J. Nicholson, the leader of Government Business, supported by justice minister Mark Golding, instructed an orderly not to take Malahoo Forte's bag out of the chamber.

It is not uncommon for orderlies to take bags or other personal items from the chamber.

Nicholson, after shouting his instructions to the orderly, and then seeing Opposition Senator Kamina Johnson Smith take the bag out of the chamber, rose and gave the impression he thought Malahoo Forte was about to run away.

"The person who you ask the letter be presented to you, and the minister also asked for a copy of the letter, her bag was just taken up, and if she is leaving the precincts of the chamber, I ask that you send for her," Nicholson said.

A day earlier, Malahoo Forte had read into the records of the Parliament, a letter purportedly from the Judicial Committee of the Privy Council to former justice minister Dorothy Lightbourne indicating its willingness to travel to Jamaica to hear cases.

The Senate president requested that he be furnished with a copy of the letter.

Morris, at the start of the sitting on Friday, said he had not received the copy of the letter he requested and wanted to know the situation with it.

"I had the letter here on the desk, and when I was looking for it among my things yesterday, I didn't see it. I am not sure where it is, but I think it may be among the papers. I will make it available to you," Malahoo Forte responded.

Following her suspension, Malahoo Forte said she has the letter. This may, in fact, be so. At one point during the sitting, she had received a folded paper, and a member on the Government benches (maybe K.D. Knight) beckoned as if to ask to see it, and she smiled and put it away.

If that letter really exists, she can just produce it at the next sitting and retake her seat. But it should not be said that Morris was high handed in dealing with the matter.

Indeed, four minutes after he first sent the marshal to Malahoo Forte and got the response "received", Dr Christopher Tufton questioned the authority of the president to send the marshal to retrieve her. He also said he wasn't convinced she was "running or deliberately hiding". Tufton appeared to be buying time for Malahoo Forte.

And for those people unaccustomed to the Parliament, despite its many shortcomings, several areas in the building, including the lunch room and the conference rooms, are equipped with audio-visual equipment to allow members to follow what is taking place in the chamber.

So when Tavares-Finson complained that Malahoo Forte was tried and sentenced in absentia, they all had an opportunity to leave the lunch on the table and take a few short steps back to the chamber. But, perhaps for strategic reasons, they decided to stay away. Perhaps that is why Malahoo Forte sent back to tell Morris to go ahead and adjourn the Senate and she would get the letter to him.

And this was two minutes before the motion to suspend her was moved and approved.

"I bent backwards yesterday to accommodate the member, but I think this has gone way past the limit now," Morris said before calling on Nicholson to move the motion for her suspension.

Quite appropriately, Morris applied Standing Orders 43(4), which states: "If a member shows disregard for the authority of the Chair, or abuses the rules of the Senate by persistently and wilfully obstructing the business of the Senate or otherwise, the president shall direct the attention of the Senate to the incident, mentioning by name the member concerned. The president then shall call upon a minister to move "that senator... be suspended from the service of the Senate", and the president shall forthwith put the question, no seconder being required and no amendment, adjournment or debate being allowed."

He also referenced 43 (13), which says that "nothing in this Order shall be taken to prevent the Senate from proceeding against any member for any breach of order not specified herein, or from proceeding in any other way that it thinks fit in dealing with the breaches of order herein mentioned."

While it is that Malahoo Forte may have been fried in two-day-old oil by the president, considering that a similar motion on Thursday to suspend her was stood down by Morris, then it is hard for anyone to argue that she was not disrespectful to the chair. Friday's suspension resulted from the contempt shown to Morris and should not be confused with Nicholson's unfortunate instructions to the orderly.

There was ample time for her to have returned to the chamber after she was first summoned; and the 'go ahead and adjourn' statement, if the Marshal heard correctly, and relayed properly to the president, was rude.