Needed: a health minister - in the real sense 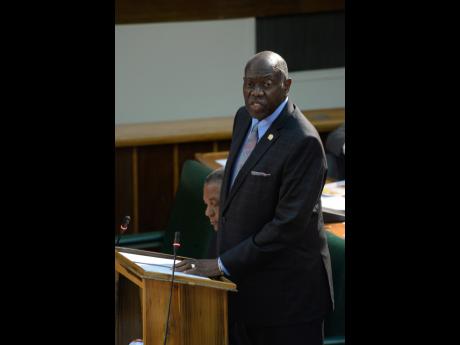 Dr Fenton Ferguson seems like a nice guy. He has that older, decorous, almost stately way about him, making him the ideal candidate to play the role of a celibate country parson in a movie, if ever the opportunity arises.

Of course, Dr Ferguson, as far as I know, is no actor. For better or worse, he remains the health minister of this great nation. Our expectations of him, therefore, are high.

It is sad, then, that on Tuesday, the goodly minister made one of the most offensive, thoughtless statements of his long career - a feat not easily achieved for a man prone to bumbling utterances.

In Parliament, while addressing the issue of babies dying from exposure to bacteria at two of the island's hospitals, the minister found it fit to say:

"When babies are born under seven months, their organs are not well developed ... . Their immune systems are significantly compromised, so I don't want anyone to give any impression that these are babies in the real sense."

Now, what are we to understand from this? Does our minister of health believe that because the babies who became infected with the bacteria were born pre-term, they weren't really babies after all and so their deaths aren't such a big deal?

Would he have been more eager to act on the matter, or found the public outcry more understandable if the babies were born after nine months? Should the parents of these babies be consoled by the idea that their loss is not as 'real' as that felt by mothers and fathers of full-term babies?

That the babies were born pre-term and, therefore, challenged with weak immune systems is irrelevant. They were in a hospital with excellent doctors and nurses who understood their needs more than anyone. They did not die simply because they were pre-term, with compromised immune systems. Pre-term babies are born every day. Some die but many others go on to live full, healthy lives, thanks to the advances of modern science.

The fact is that the babies of whom Dr Ferguson spoke so callously, had become infected with specific bacteria that somehow tragically got introduced on to their wards - creating a challenge that their tiny bodies, health professionals, and medical equipment were unable to conquer.

All effort should now be spent to understand how and why the bacteria got introduced on to the ward; why it took so long to be reported; and how, for Pete's sake, it can be avoided in the future.

Dr Ferguson, Chief Medical Officer Marion Bullock DuCasse and others in the health ministry and at the hospitals are under pressure to resign. I think that even they must, deep down, understand why, considering the events of the past several months.

The pressure is even greater now given that two senior members of the University Hospital of the West Indies management stepped down.

But, even within this context, Dr Ferguson's display in Parliament on Tuesday was painfully inappropriate. That he expelled so much effort expressing his belief in his own inculpability, when the wounds from this tragedy are still raw, and while other babies infected with the bacteria are still battling for their lives, was, at best, unwise.

I cannot comfortably say that Dr Ferguson should resign, or that he has done anything that warrants him being forcibly removed from his post. What I do hope, however, is that he takes a long, hard look at his leadership - the style and substance thereof - and where there are flaws, he addresses them quickly. Jamaica needs a minister of health who can lead - in the real sense.

- Robert Lalah is features editor and author of Roving with Lalah. Email feedback to columns@gleanerjm.com and robert.lalah@gleanerjm.com.