Who cares about Senate sideshow? 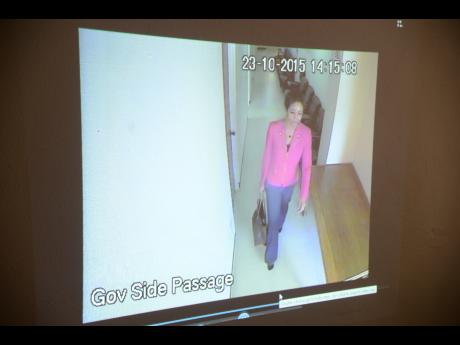 Jermaine Barnaby
Marlene Malahoo Forte, with the infamous handbag in tow, is captured in CCTV footage in a corridor of Gordon House, but Mark Wignall suggests that the Senate brouhaha is not on the list of priorities of the common man.

As the fog of politics descends on the Privy Council-CCJ debate, we can more easily make out who had set out to claim the title of martyr and, although Senator A.J. Nicholson could not help himself by coming across as abrasive, it does appear that Senate President Floyd Morris was not trying to play politics, as some have said.

I have repeatedly made the point that although our people have become more aware of current issues because of the exponential increase in interactive media, there are still some matters that are assimilated differently as one moves down the socio-economic ladder.

Although the man at street level is certain to be impacted by it when the final switch to the CCJ eventually occurs, the items that tend to occupy his mind and life in the living room and during a dinner discussion are the poor state of his community roads, the high murder rate and youth unemployment.

Following on that are finding bus and taxi fare for the children attending school, along with the lunch money. The monthly struggle with utility bills is also up there as a major concern. More disposable income and a stomach that does not have to worry about the next meal will allow in the 'esoterics', but the woman at street level is not as taken up with the details in a letter being waved around as much as the retention of a job that gives her four days' work each week.

Where the thoughts of the middle class as a collective body and that woman will share common concerns is with the dead babies scandal. Very few people are now gazing at Minister of Health Fenton Ferguson and not wanting him to be separated from his job.

It was not surprising to me that the PM's first comment on the matter gave the nation more than the impression that Dr Ferguson was more cemented in his post, even as he continued to encourage his own foot-in-mouth disease.

As the election engine revs up, many gears are gritting and more smoke is coming from the engine than speed. Previous opinion polls usually measure trends that take into consideration 'all things being the same.' In other words, the comparative strengths of both the PNP and the JLP assume that it will move in a certain direction and, even if the numbers change, there will be no radical shift.

The irony of that is, the reality of the election season makes it impossible for any of the major players in both political parties to be gaffe-free and for the PNP administration to be not prone to any major policy breakdown at this time. And, of course, as one side uses fog to cover up the smoke generated by the other side, the truth comes down to how strong one party's colours are relative to the other.

Is PNP or JLP better

On a Facebook post, Owen James stated recently: "Watching carefully to see whether political aspirants with business training will lobby for better business laws or support the status quo."

We have long moved past the days of Michael Manley's democratic socialism and Eddie Seaga's statist version of market-oriented policies and direction.

One would be hard-pressed to get our prime minister to tell us what her general view of business in Jamaica is. I am certain that her technocrats will tell us that the PM supports better business laws, but it would be interesting to determine how strong she believes is the business lobby on her party to maintain the status quo.

We have seen various international reports, some sharply contrasting with others, which state that the indices for doing business in Jamaica are moving in a positive direction. Although Opposition Leader Andrew Holness has sharply criticised the PNP administration for not creating a growth space for the economy while the country is held in the grips of an IMF agreement, Holness did not hint to us what was his magic wand approach.

We know that it was in 2009 when the JLP was in power that the Junior Stock Exchange came about. We saw the rise of companies such as Access Financial which was, like other similar companies, reaching out a lending hand to small entrepreneurs.

On the stock exchange, we saw the rise of a company like LASCO which, while nowhere as old as, say, another Jamaican company, GraceKennedy, is now worth about $30 billion and growing by leaps and bounds. Both the PNP and the JLP need to embrace business successes like these.

The manifesto of the JLP going into the 2007 election was mainly about jobs, jobs and jobs. To be fair to that party, it came into power just as the global recession hit. Although then Finance Minister Audley Shaw had foolishly downplayed the impact that the crisis would have on Jamaica, in 2010, many of the 'fundamentals' of the economy were, if not back in place, heading in the right direction.

Of course, there was that matter of a stalled IMF agreement, the Tivoli Gardens tragedy, and 'jobs, jobs, jobs' became mere words written in a manifesto as the JLP crashed.

The PNP administration has been crowing about the significant increase in hotel rooms slated for the next few years. Contrast that with the Krauck and Anchor debacle earlier this year which was championed by Anthony Hylton.

Hylton knows that he will never be prime minister in this lifetime. With failures in the logistics hub and the inability of his actions to keep pace with his mouth, that portfolio should be taken away from Hylton.

Based on the promise of temporary jobs under the JEEP, the PNP can make the claim that the 2011-2015 term was purely about fiscal preparation under the IMF, a few temp jobs and the usual growth in the tourist industry.

Will the electorate buy into the view that the next term will be about real jobs? Will it believe that the jobs announced for a car assembly plant will be realised?

MP for West Rural St Andrew, Paul Buchanan, telephoned me last Wednesday. According to him, it is in the area of IT that the next wave of high-paid Jamaican jobs will come about.

"This is not a dream. This is reality. There are bright young people out there. If we could get in more of the lotto scammers and channel them towards the legal track, we would be providing Jamaica with a cadre of trained young people who could find jobs anywhere in the world."

As I have already stated, I expect the bulk of the vote to both the PNP and the JLP to be generated by the base.

According to Paul Buchanan, "Every bright youngster that is now recruited into an IT course is competing with another who has been targeted by a lotto scammer. That is the reality at this time."

It may not gain them votes, but the PNP and JLP need to give us believable specifics on where the jobs will be coming from.

The JLP, of course, has the easier route because it can pretty much promise anything like the salvation promised by the souped-up parson. The PNP has to actually perform and, we have seen the glaring areas of its underperformance since 2011 placed alongside Minister Phillips' glowing success with meeting IMF targets.

The man and woman who are at this time planning on voting for either the PNP or the JLP may be placing the vote based on tradition or a little 'oil in his engine'.