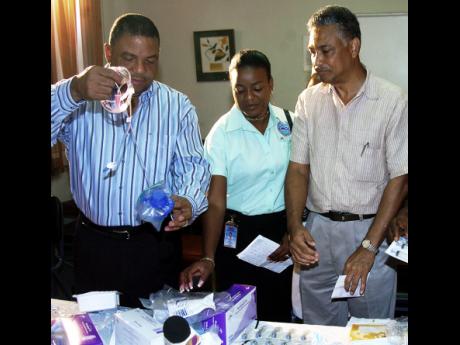 In this July 14, 2007 file photo, Health Minister Horace Dalley inspects some of the $10m worth of medical supplies donated to the Kingston Public and Victoria Jubilee hospitals. Beside him are Patrece Charles of Food For the Poor and Dr Patrick Bhoorasingh, senior medical officer.

There's too much frenzied excitement, much of it politically motivated, surrounding the latest health-care crisis and altogether too much celebration regarding the sidelining of Fenton Ferguson, a long-time major contributor to an excess of deadwood in Cabinet.

That the Jamaica Labour Party (JLP) has calculatedly politicised health care is without serious doubt, especially as after riding the chik-V wagon without offering a single practical solution and crying, "Wolf! Wolf!" regarding ZIK-V, they now appear overjoyed at the latest bit of bad news running around, repeatedly shouting, "Dead baby scandal," which is an unfortunately and unnecessarily insensitive sobriquet.

This is sad because insofar as Jamaica's health care is concerned, we face a national crisis and have done so for years. This is nothing new. It was exacerbated by the JLP's desperate politicking during their time in government when they scrapped user fees, causing extreme stress on the system and contributing to its underfunding. The People's National Party, petrified to appear politically unpopular, cowardly continued this anti-health-care policy, which is one of the causes of the current crisis.

Like it or not, Jamaica's problems in health care weren't created by Fenton Ferguson and won't improve one iota for his lateral posting. Fenton Ferguson has contributed a big, fat nothing to Jamaica's health care. He's not alone. Despite some improving indices regarding mortality and disease, nothing has fundamentally happened in health care for decades, particularly in the mechanics of the system, and especially since we concentrated on passing International Monetary Fund tests. NOTHING will happen now that a desperate government has thrown raw meat in the shape of Fenton Ferguson to the attack dogs.

Lest we forget, long before this much-ballyhooed 'health audit', the chronic state of public health care was first brought to light by the Medical Doctors' Association, and, in particular, former president Alfred Dawes. On May 2, The Gleaner reported;

"President of the Jamaica Medical Doctors' Association (JMDA) Dr Alfred Dawes has charged that medical doctors are being given 'scandal bags' instead of surgical aprons to do their work in operating theatres ... .

"And if that weren't enough, Dawes charged that operating theatres are anything but sterile in an environment that is teeming with fungi.

"... Dawes ... said that in the absence of standard medical masks, doctors have had no option but to use Ebola masks. ... He charged there were no medical tubes to drain blood, pointing to makeshift ones in what he described as a dysfunctional supply chain in the public system.

"Dawes said the sad state of affairs at public-health facilities is compounded by the constant opening of doors to operating theatres, which should be closed to prevent foreign matter from entering."

It's not news that infection control has been a perennial problem in our public hospitals. It's not news that underfunding of public health care in the name of 'fiscal consolidation' and then the 'IMF programme' has been wreaking havoc with best practices for years. For his trouble, Dawes was victimised and hounded until he was forced to resign as JMDA president.

The document, which all media awaited with bated breath (last Friday, the combined media watch looked and sounded like a countdown to lift-off at Cape Canaveral as every passing minute without publication was highlighted like an approaching hurricane) turned out to be an infection control audit (ICA), NOT a 'health audit'. Accordingly, despite the best efforts of media sensationalists to make it sound new and exciting, it disclosed NOTHING that interested observers didn't already know.

Dr Dawes in May: "Medical doctors are being given 'scandal bags' instead of surgical aprons to do their work in operating theatres."

ICA (June): "Linens and gowns are also in short supply."

Dr Dawes (May): "Operating theatres are anything but sterile in an environment that is teeming with fungi."

ICA (June) - Re Spanish Town Hospital: "There is 'fungus' growing between the panes of glass in the window of the operating room."

Dr Dawes (May): "The sad state of affairs at public-health facilities is compounded by the constant opening of doors to the operating theatres, which should be closed to prevent foreign matter from entering."

ICA (June): "... The operating theatre suites were built many years ago and ... in some instances, the layout needs a review, and, if possible, changes implemented to facilitate patient, staff and supplies flows (e.g., at BHC (Bustamante Hospital for Children), sterile supplies and instruments have to be taken through the 'dirty' sluice room to get to an operating 'clean' area).

... The demarcation of access areas for traffic flow through the theatre suite is non-existent. As such, there's difficulty ascertaining the levels of restriction. The theatre doors at the majority of facilities need urgent replacement. It's quite easy to see through the space between the doors when they are 'closed', compromising sterility in the rooms. Some doors have holes, hinges are rusted and others are infested with termites. Subjectively, the operating theatre lights are dull and some fixtures have absent and non-functional bulbs ... ."

This is what doctors have been telling us for years. NO REVELATION is made in the report.

Politicians anxious to make hay while elections are not called can be excused for getting all excited about the audit's publication and jumping up and down celebrating the 'success' of the #FireFenton campaign. But serious thinkers should prefer to see the inadequacies in our public health-care system, especially with regard to infection control, effectively addressed.

To begin with, Fenton Ferguson has NOT been fired. He was assigned a different Cabinet post for which he continues to enjoy full salary and perks, so all you high-fiving, excitable purveyors of personal misfortune should settle down. Horace Dalley, apparently appointed minister of health, was in that position in the year before the 2007 election. He didn't clean up a single bit of fungus, repair a single operating room door, or buy a mop or mask for janitor or doctor alike.

In 2006, Health Minister Dalley's call for condoms to be distributed in prisons nearly caused a prison riot. In 2007, Dalley presided over a malaria outbreak, which his ministry addressed by "house-to-house surveys". In 2007, on Dalley's watch, nurses complained bitterly about a lack of basic health supplies such as syringes, needles and Panadol. There was a mass exodus of nurses from Jamaica on Health Minister Dalley's watch. In July 2007, lack of critical medical items at KPH and Jubilee had Health Minister Dalley on the defensive. In an interview on 'Beyond the Headlines', he blamed the hospitals' management. So good luck expecting any better from him in 2015!

Please note Dalley's current portfolio in the finance ministry hasn't been reassigned, so either he was mostly idle, or this is all an illusion to quieten down the #FireFenton activists. Somebody please tell me how Dalley can effectively perform both full-time assignments. Is there REALLY a reshuffle, or is it the same-old, same-old behind the scenes with only official titles changing? Are Dalley and Ferguson two sides of the same obsolete coin?

But, it matters not, because ministerial reshuffling or even dismissal won't begin to solve the actual problem. If you carefully itemise the issues raised by the ICA, you'll readily see that every one of them is a budgetary concern and has nothing to do with the minister's identity.

Unless Dalley is coming to the job carrying a huge cheque, NOTHING will change. Folks, please don't fall for this obvious political trick. Don't celebrate Ferguson's transfer as 'mission accomplished' and as if the problem is automatically solved. Focus on insisting that Government address the real problem by finding and allocating much-needed funds to public health care.

Media could help by putting a stop to the distracting personal attacks. JLP must stop playing politics with health care. Jamaicans must rise up as one and demand that the Government find the required funds to address issues raised in the ICA and stop being satisfied with convenient, illusory scapegoats whose presence or absence contributes zero to any solution.

#FireFenton all you like. But will this mean one fewer infected baby?