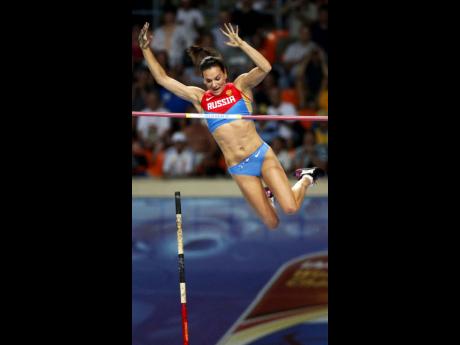 AP
Yelena Isinbayeva, multiple medal winner in the pole vault, has complained that a ban on all Russian athletes is wrong.

When the news came that there were serious drug problems in Russian athletics, nobody was surprised. We can't be blamed for being sceptical. Too many of the world's top athletes have been caught with illegal substances for us to be surprised when we hear these things. Nowadays, the question is not which elite athlete is on drugs, but which elite athlete ISN'T!

The Russian stories have been mind-boggling. One man who runs a laboratory has admitted destroying more than 1,400 samples when he knew that WADA was coming to audit! Dick Pound has claimed that the level of doping in Russia was such that he is convinced that the state must have been involved. His recommendation is that the Russian athletics federation be banned from future IAAF meets until he is convinced that it is prepared to get its act together.

Many Jamaicans feel that Russia is getting exactly what it deserves. They have bought hook, line and sinker into the belief that the Russian state is behind the proliferation of doping cases. I'm not sure why. There is no hard evidence yet to suggest that. The president, Vladimir Putin's, spokesman, Dmitry Peskov, said recently, regarding government involvement, that "before we hear any kind of evidence, it is hard to accept any accusations. They are quite unfounded."

Our gut feeling may be telling us one thing about this state-sponsored doping regime. But it's not what we believe, it's what we can prove that should determine Russia's immediate fate.

There are those who feel that WADA, and, maybe, the International Olympic Committee, have no choice. Those of that mindset feel that the powers that be must do something to show that they are committed to the fight against drugs, and banning the Russian federation is the only alternative open to them. I disagree.

I have never believed in the principle that the good must suffer with the bad. There are some athletes in Russia who are innocent, and banning the Russian federation would be tantamount to punishing people for crimes we are not sure they committed.

That is one of my fundamental problems with the Bible. I have struggled to accept the story that two people in a garden committed a sin, and a just and rational God would essentially 'have off' the entire mankind on a whole for that. Christ then had to come to Earth to be murdered in order to 'save' mankind for sins they didn't commit. But, surely, I'm digressing.

Yelena Isinbayeva, for example, is already complaining. She is a two-time Russian Olympic gold medallist in the pole vault, and has been competing at the international level all over the world for well over a decade, without ever being implicated in drugs. She clearly would have been tested multiple times, and found clean. Why should she suffer the fate of not competing because of corrupt officials in her country?

WADA was not pleased that JADCO practically did no tests on our top athletes in the months leading up to the same 2012 London Olympics that we are hearing the Russians 'hijacked' with their systematic doping. We in Jamaica blamed JADCO. Not too many of us felt the Jamaican Government was complicit in any way.

Not testing athletes before a major event like the Olympics could well be seen as deliberate state neglect, couldn't it? Could the argument not be made that refusing to test athletes leading up to an Olympics was not far removed from testing them and then destroying the samples?

We must be careful we don't come down too hard on the Russian federation and, by extension, clean Russian athletes. WADA should go in and, maybe at the Russians' expense, ensure that there is a vigorous drug-testing programme from here on in.

Any banning of the Russian federation is unfair. We already are hearing countries that are friendly with Russia planning a boycott in Rio if that were to happen. WADA and the IAAF may be creating a bigger problem than the one they are trying to solve.