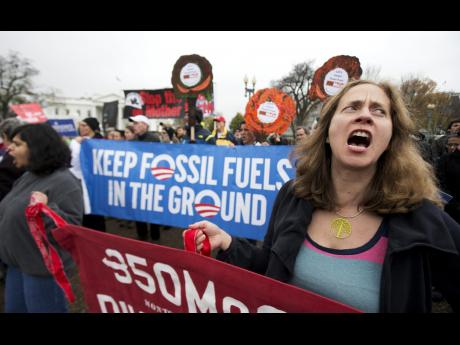 AP
Kristin Cook of Potomac, Maryland, joins a rally outside the White House in Washington, Sunday, in support of the climate talks in Paris. Government and business leaders are banking on clean-energy technology to fight global warming, kicking off this week’s high-stakes climate-change negotiations by pledging tens of billions of dollars for research and development.

As a boy in the 1970s, I once became scared that soon I wouldn't have enough food to eat and place to walk on earth, for the United Nations and some liberals had forecast that with rapid population increase, we would soon run out of food and space.

They had academe on their side. Stanford University professor, Dr Paul Ehrlich, wrote in his book, The Population Bomb: "The battle to feed all humanity is over. In the 1970s and '80s, millions of people will starve to death despite any crash programmes embarked upon now. At this late date, nothing can prevent a substantial increase in the world death rate, although many lives could be saved through dramatic programmes to 'stretch ' the carrying capacity of the earth by increasing food production and providing far more equitable distribution of whatever food is available. But these programmes will only provide a stay of execution unless they are accompanied by determined and successful efforts at population control.".

And there came determined efforts at population control. China implemented in 1979 a one-child family policy and began punishing couples who defied it. other countries put in place measures not as drastic and punitive but nonetheless aimed at slowing population growth to ensure survival.

Now we know that it was all a scare. Earth is not overrun by people, and there continues to be enough food to feed all of us, and poverty has more to do with politics than with population increase.

Now a similar thing is happening. It is called global warming or climate change, which claims that the temperature of the earth is rising because of the overuse by humans beings of fossil fuels such as coal and oil which, when burned, release carbon dioxide and other gases into the atmosphere. This rise in temperature is blamed for increased floods, droughts, heavier rains, ocean warming and glacial melting.

If we continue, we are told, the planet will eventually burn up, so we have to save it by reducing drastically or eliminating altogether our use of fossil fuels. Someone is recommending reducing cow fart, but they don't say how we are going to do so.

This sounds sincere, but it is all a load of rubbish, created and perpetuated by liberals who hate capitalism and who feel that developed countries such as the United States are responsible for the poverty of the Third World through their exploitation of the environment.

First, there is no conclusive evidence that the Earth is warming. Dr Benny Peiser, director of the Global Warming Policy Foundation, said recently that global warming has not happened. Speaking to Express Co UK, he said, "What has happened is that the public has become more sceptical because they were told we are facing Doomsday, and suddenly they realise, 'Where is the warming that we were promised?'

Nigel Lawson, chancellor of the British Exchequer from 1983-89, in an essay titled 'Trouble With Climate Change', said: "But of course this is not going to happen. Nor should it; for at bottom this is not a scientific issue. That is to say, the issue is not climate change but climate change alarmism, and the hugely damaging policies that are advocated, and in some cases put in place, in its name. The essay was printed on the Global Warming Policy Foundation website

Second, even if there were global warming, there is no evidence that it is caused by man and that it will increase to jeopardise life on earth. I believe that there have been cycles of warming and cooling since God put man on the Earth, but these had to do with the natural processes of the Earth rather than the activities of man.

Isn't it overweening hubris for us to think that we can destroy this earth that God created and gave to man? That He is either so powerless or absent that man, by his activities, will so ruin the earth to make it uninhabitable?

Man has been on Earth for thousands of years at least and he has been living off his environment and thereby plundering it, and the Earth has continued to replenish itself to sustain man. Yet in one generation we are going to deplete its resources and destroy it? Who do we think we are?

- Ewin James is a preacher and freelance journalist based in Longwood, Florida. Email feedback to columns@gleanerjm.com and eroyjames@aol.com.