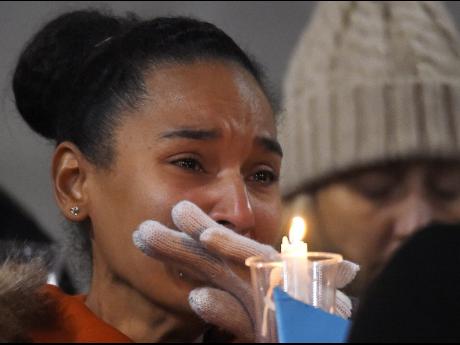 AP
A woman cries during a vigil for shooting victims at San Manuel Stadium, Thursday, December 3, in San Bernardino, California. A husband and wife opened fire on a holiday banquet, killing multiple people last Wednesday. Hours later, the couple died in a shootout with police.

He's only done that twice before, about the Deepwater Horizon oil spill and the end of combat operations in Iraq, both in 2010. The shooting in California killed 14 people and wounded 21, so it wasn't even the biggest mass killing of his administration, but it got special treatment because it was a terrorist attack.

He needed to do that because you just have to say the word 'terrorist' to send many Americans into a flat panic, and many American politicians into spasms of oratory overkill. A representative example was New Jersey governor and would-be Republican presidential candidate Chris Christie, who said: "We need to come to grips with the idea that we are in the midst of the next world war."

The next world war? The last world war killed at least 40 million people. The next one - the Third World War that we were waiting for when I was growing up - would have killed hundreds of millions, even if it didn't cause a nuclear winter and kill billions. With due respect to the victims, the 16 dead in San Bernardino do not add up to a new world war.

Neither do the 130 French (and a few foreigners) killed with guns and suicide bombs in Paris last month, nor the 224 Russians on the plane brought down over Egypt by a bomb at the end of October. Even in Europe, Islamist terrorism kills at the most hundreds per year; in America, it kills almost nobody.

Before this week, only 16 Americans had been killed on home soil by Islamist terrorists in the Past 14 years (13 soldiers killed by US Army psychiatrist Nidal Malik Hasan at Fort Hood, Texas in 2009, and three killed at the Boston Marathon in 2013). That's an average (including the San Bernardino deaths) of two people per year killed in the United States by Muslim terrorists. .

So why didn't Barack Obama finish his speech by pointing out that Americans are 170 times more likely to drown in the bath than to be killed by Islamist terrorists? Because no public figure in the United States is allowed to say that the terrorist threat is very small in the West, generally, and utterly minuscule if you actually live in the United States.

On the one hand, we have a trillion-dollar 'War on Terror' defended by a US military and security establishment that has grown fat on the proceeds. On the other hand, we have a very small terrorist threat to the 'homeland' against which, for the most part, that establishment's efforts are irrelevant because the attackers are home-grown, self-radicalised lone wolves.

None of the three 'Islamist' attacks over the last 14 years was planned from abroad. All were carried out by US citizens or permanent residents. None of those people, so far as is known, was even in contact with organisations like al-Qaeda or Islamic State (although Tashfeen Malik pledged her allegiance to the latter on her Facebook page on her way to the massacre at the Inland Regional Centre in San Bernardino).

The Islamist extremists pose an existential threat to Syria and Iraq. They are a serious threat to the other Arab countries, and a rather more distant problem for other Muslim countries. For Western, Asian and African countries that do not have large Muslim populations, they are merely a strategic nuisance.

If any of those outside powers want to fight the Islamists on home ground (like the NATO countries and Russia, who are all now bombing Islamic State targets in Syria), by all means do so. You might save the Syrians from a very unpleasant fate. But don't imagine that this is necessary for your own defence.

Conversely, don't worry that the bombing will cause terrorist attacks on you at home. Those attacks will happen no matter what the United States (to pick an example at random) is doing or not doing abroad. And a country that can blithely ignore 63 shooting attacks in its schools since the beginning of this year can manage to live with a small Islamist attack every few years too. "