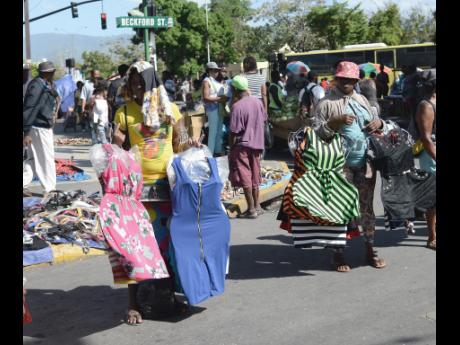 When P.J. Patterson was prime minister, he once colourfully lamented the increasing "uglification" of Jamaica, by which he meant not only people's disregard for, and abuse of, the natural environment, but the grittiness that encroached on the island's cities and towns. He pledged to do something about it.

Whatever Mr Patterson did was obviously not enough, or has not been sustained. Urban blight has spread. Many of Jamaica's inner-city communities are grittier than ever; physical infrastructure is decayed, and law and order remains problematic.

Andrew Holness, the Jamaica Labour Party's leader, has promised to do something about the problem if his party wins the general election on February 25.

"We will revitalise and rebuild our town centres and cities," he said in a broadcast last Thursday night. "There is much value lying idle in our real estate in blighted urban areas."

He plans to start with the old downtown section of the capital, especially what, in almost any other country, would be prime real estate, the Kingston waterfront, which sits astride the world's seventh largest natural harbour. And he is right that any such undertaking, given Jamaica's current circumstances, demands the vision and the fillip of the Government, working in partnership with the private sector, to get the job done.

We hope, if it comes to it, that he has greater success than the previous JLP administration of 2007 to 2011, of which he was a part. For being a driver of any such project doesn't necessarily mean government throwing huge chunks of money at it, which we hope is not what is implied by Mr Holness' pledge to use earnings from an IPO of the Urban Development Corporation for such an endeavour.

In large part, government involvement should be by example and use of its fiscal and related policy instruments.

The former is what the previous JLP could make stick at its last go.

Bruce Golding, the then prime minister and Mr Holness' predecessor as leader of the JLP, talked a fair bit about downtown Kingston's redevelopment and accelerated the rhetoric in the aftermath of the security operation in Tivoli Gardens to capture the drug lord, Christopher Coke, and to rout his militia.

Private-sector interest, on the wave of the post-Tivoli euphoria, bought into the idea and some accelerated their own projects. Unfortunately, despite tens of thousands of idle government real estate downtown, some government ministries and agencies preferred to bolt for the immediate comfort and perceived safety of uptown, seemingly in defiance of Mr Golding's directives.

In recent times, there have been a few encouraging signs in this urban renewal in downtown Kingston. But the few green shoots by the private sector, utilising the tax credits afforded to such schemes, have been insufficient. Indeed, we do not believe that the current administration has been sufficiently aggressive in its promotion.

Whoever forms the next government, we hope for an acceleration of the initiative - not just in Kingston, but across Jamaica. The Government can start by doing the small things, like cleaning drains, cutting verges and removing derelict buildings.