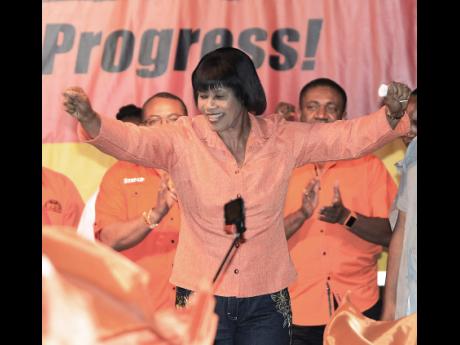 According to the theoretical norms, our political leaders are, in fact, our servants. Sounds a bit like religion to me, where one earthly divinity can occupy two roles all at once.
No wonder it is so bastardised. The PNP signed on in December 2011 to serve us. Even though we know it's a big joke, in practical terms, the experience is that political leaders and parties are at their most vulnerable just around election time. At all other times, they act as our overlords.
On the assumption that the ruling political party has inspired in us a new and better way forward, has engaged in meeting manifesto promises, and, in the route from ideas to policy formation and delivery, has made our lives, at the very least, marginally better than in the reverse, at the core of the broader understanding must be dialogue.
Whenever such dialogue is shut down arbitrarily by the ruling party, it is the first baby step to incipient arrogance, then disdain, then the state baring its fangs. In the PNP refusing to face off with the Opposition JLP in national debates, it has gritted its teeth, puffed up its chest, and dared us to do our worst.
In adopting that stance, it has emptied a bucket of slop over our heads. Worse, it wants us to enjoy the experience.
With the undying love for us it claims, we would have expected, since we know that the prime minister prefers reigning to governance, and silence instead of engaging the people, that the PNP would design a better screenplay to explain its debate refusal.
We know that nothing in the Constitution mandates the ruling party to engage in debate with the Opposition. What we do know is that both the PNP and the JLP are always carrying around with them a mountain of nonsense to unload on their robotic followers at choir practice.
What a national debate does is move the conversation from the cacophony and fog of political rubbish to the scrutiny of a wider population anxious for policy details and direction.
Why the PNP should bother to pretend that it has legitimate reasons for debate refusal escapes me. First, the reasons given that the opposition leader has defamed the PM and ought to apologise is laughable. Second, we know the real reason.
The prime minister is deathly scared of debating. Somehow she has been able to convince herself that her lead in the opinion polls is sufficient going forward, and a little matter like responding to the will of large sectors of the population who are outside the lesser numbers of those making up her party’s core base is immaterial.
Constitutionally, she is on sound ground. Where polities evolve and adopt conventions that advance the practice of democracy, the prime minister and the PNP have chosen instead to devolve into playing out the court jester who has spent too long a time consorting with the haughty but apathetic queen.
There can be no excuse for this infamy and the PNP deserves to be punished come next Thursday.

In a seat like Western St Mary where I expect the JLP’s Bobby Montague to relieve the PNP’s Jolyan Silvera of his win in 2011 by a significant margin, money is still important, but even more so in the fight in West Rural St Andrew between the PNP’s Paul Buchanan and the JLP’s Juliet Cuthbert-Flynn where the race is expected to be much closer.
The same is expected in East Rural St Andrew between two newcomers, the PNP’s Imani Duncan-Price, and the JLP’s Juliet Holness. “Boy, is a pity one a dem have to lose,” said a constituent to me last week. “It look to me that they both have so much to offer.”
It would not surprise me if opinion polls published this week show the PNP losing some small ground. Because of this, the funding to keep one’s face visible and one’s voice viable is just the preamble to complete the ground game of funding to get out the vote on election day.
“We have got significant funding now. People who would not talk to me last year are responding now, especially over this debate issue than before,” said the JLP’s Daryl Vaz. “Private-sector interests are hopping mad. We can always use more, but we have come a far way.”
While Vaz is expected to easily retain his West Portland seat, there are some who believe that the JLP’s James Robertson, one of the Young Turks of the 2000s, will have to fight all the way to claw back his Western St Thomas seat.
Robertson has gone silent, but during elections, that has always been his style. He is known for being quite clinical in carving out his close victories. “Don't listen to anyone,” said a PNP source to me. “Robertson is beaten, and he knows it.’
In St Andrew Eastern, the PNP’s Andre Hylton would easily retain his seat if pure charisma was all that was needed. “I recently listened to the JLP challenger Fayval Williams, and while she has some great ideas, I am not sure she has the personality to sell them,” said a medical doctor who lives in the constituency. “She comes across as a university lecturer, not a politician trying to sell a product of new ideas.
In St Thomas Eastern, the still-wounded ex-health minister Fenton Ferguson may be deserving of losing his seat if only for his handling of the chik-V outbreak in 2014 and the dead babies scandal in 2015. Ferguson doesn't have much to play with, and the younger, more energetic and politically hungrier Delano Seiveright may find the election day magic to overcome the JLP 288-vote deficit and take this seat into the JLP column.
Clarendon South East I expect will slip into the PNP column, with another of the Duncan ladies upsetting the JLP’s Ruddy Spencer. I expect the JLP to take St James Central and also to snatch back St Elizabeth South West in another nail-biter.

WHAT ARE WE MISSING?

It is normal that less than one week out from an election, one is quite sure exactly which party will be winning. Although many political pundits have already handed the election to the PNP, it ought to be said that political punditry, certainly not a science, is fraught with danger.
If the PNP had 100% confidence in the results of its canvasses, opinion polling and the state of its organisational readiness, would it be scampering away from adult debates and acting like a child grabbing up its marbles and running home?
“Mark, yu know me as a PNP,” said the bartender to me early last week. She turned towards the shelf. “Is like a bottle missing from a slot right here, but I don't know is which bottle missing,” she said, as she and a few others were expressing the view that an undercurrent to the polls has not been captured.

“I am going to vote for the first time,” said a 35-year-old woman to me. “I don't see any real difference between PNP and JLP, but I am placing a vote against the PNP for its refusal to debate.”
Almost every political pundit who I have spoken with have given their views of this ‘unknown’ that they sense is happening but can't quite place a finger on it.
The accepted theory is, if significant swathes of the under-35s turn out to vote, it could swing the election in the JLP’s favour. If the middle class, which has taken the PNP debate snub personally and are livid over it, turn out to vote, the PNP is toast.
On the other hand, the PNP has invested much time since the latter part of last year in re-engaging its base and in sharpening up its organisational tools.
“Listen, you and I know that a national debate is the thing that a working democracy ought to deal with,” said my PNP contact. “We know that, but why should the PM bow to Andrew Hopeless?’ he said.
“So do you believe that Holness would ever apologise as the PNP wanted? That’s  an impossible ask,” I suggested.
“We are at the 36-seat level and counting,” he said. “That’s all that matters. Winning.”
Mike Henry is saying the same thing, but to the JLP’s credit,’ I said. He shrugged.
Whatever gamble the PNP has embarked on in refusing to debate has certainly not escaped the international community.
Recently, I had conversations with officials from the embassies of two countries in Jamaica and one of the main questions that was posed to me by one official was my view on the PNP’s refusal to debate.
I told the official what I believed to be the truth. The prime minister was a weak debater and she manufactured an excuse to escape the faceoff. The poker-faced official listened and, if he was surprised, I did not detect it.
The PNP may well be on its way to another win, but I insist that an undercurrent of untapped voter intention is operating. For whom does the bell toll?